The Passion Week is the week starting from Palm Sunday reaching to the Resurrection Sunday (Easter Sunday). The Passion Week is so named because of the passion with which Jesus offered Himself to die on the cross to atone for the sins of humanity. The following is a timeline of the events that took place during the Passion Week:

Sunday – The Triumphal Entry to Jerusalem

Jesus began His journey to Jerusalem. Nearing the village of Bethphage, he sent two of his disciples before Him, instructing them to get a donkey and her colt. The disciples were asked to untie the animals and bring them to Him. Then, Jesus sat on the young donkey and made His triumphal entry into Jerusalem. By so doing, He fulfilled the prophecy in Zechariah 9:9: “Rejoice greatly, O Daughter of Zion! Shout, Daughter of Jerusalem! See, your king comes to you, righteous and having salvation, gentle and riding on a donkey, on a colt, the foal of a donkey.”


The people in Jerusalem cheered for Him and waved palm branches shouting, “Hosanna to the Son of David! ‘Blessed is He who comes in the name of the Lord!’Hosanna in the highest!”


And Jesus and the disciples stayed the night in Bethany, 2 miles east of Jerusalem. There, lived Lazarus, whom Jesus had raised from the dead, and his two sisters, Mary and Martha – His close friends.

On the morning, Jesus returned with his disciples to Jerusalem. On his way, he cursed a fig tree because it didn’t bear any fruit. This act represented God’s judgment on the religious leaders of Israel for rejecting the Messiah.

At the Temple, Jesus overturned the tables of the greedy money changers saying, “It is written, ‘My house is a house of prayer,’ but you have made it a ‘den of thieves” (Luke 19:46).

On Monday evening Jesus stayed in Bethany again, probably in the home of his friends.

Tuesday – The Mount of Olives

In the morning, Jesus and his disciples returned to Jerusalem. On their way, they saw the withered fig tree and Jesus taught about the importance of faith.

At the Temple, the religious leaders were angry about Jesus and they planned to arrest Him. But Jesus rebuked them saying: “Woe to you, scribes and Pharisees, hypocrites …For you are like whitewashed tombs which indeed appear beautiful outwardly, but inside are full of dead men’s bones and all uncleanness...Therefore you are witnesses against yourselves that you are sons of those who murdered the prophets. Fill up, then, the measure of your fathers’ guilt. Serpents, brood of vipers! How can you escape the condemnation of hell?” (Matthew 23:24-33).


In the afternoon, Jesus went with his disciples to the Mount of Olives, which overlooks Jerusalem. There, He gave the “Olivet Discourse” and prophesied about the destruction of Jerusalem and the end of world.

Judas Iscariot plotted with the Sanhedrin to betray Jesus (Matthew 26:14-16).

Then, Jesus and the disciples returned to Bethany for the night.

The Bible doesn’t mention what Jesus did on Wednesday of the Passion Week. It is probable that He and his disciples spent this day in Bethany.  There a few nights earlier, Lazarus’ sister Mary anointed the feet of Jesus with expensive perfume. And Jesus told the disciples that she has done “this for the day of My burial” (John 12:7).

Jesus sent ahead Peter and John from Bethany, to Jerusalem to prepare for the Passover Feast in the Upper Room. That evening Jesus washed the feet of His disciples as they prepared to eat the Passover. Then, Jesus shared the feast of Passover with His disciples saying,  “With fervent desire I have desired to eat this Passover with you before I suffer; for I say to you, I will no longer eat of it until it is fulfilled in the kingdom of God” (Luke 22:15-16)

During this Last Supper, Jesus instituted the Lord’s Supper, teaching His disciples to remember His sacrifice whenever they partake of the bread and the wine (Luke 22:19-20).

After supper, Jesus and the disciples left the Upper Room and went to the Garden of Gethsemane, where He prayed to God the Father. “And being in agony, He prayed more earnestly. Then His sweat became like great drops of blood falling down to the ground” (Luke 22:44).

Late that evening in Gethsemane, Judas betrayed Jesus with a kiss and the Sanhedrin arrested the Lord. Then, they took Him to the home of Caiaphas, the High Priest, where the council had gathered for the trial of Jesus.  In the early morning hours, Peter denied knowing his Master three times before the rooster crowed.

Judas Iscariot, who had betrayed Jesus, felt great guilt and went and hanged himself.

Jesus had to endure false charges, condemnation, mockery, and beatings. And the court sentenced Him to death by crucifixion.

Then Jesus carried his own cross to Calvary where, He was nailed to the cross at the third hour (9 am). And He prayed, “Father, forgive them, for they do not know what they do” (Luke 23:34). Just before He died, He again prayed, “Father, ‘into Your hands I commit My spirit. Having said this, He breathed His last” (Luke 23:46) at 3 pm.

Friday evening, Nicodemus and Joseph of Arimathea took Jesus’ body down from the cross and placed it in a tomb.

Saturday – Jesus rested in the Tomb


The Passion Week shows the infinite love of God to fallen humanity: “For God so loved the world that He gave His only begotten Son, that whoever believes in Him should not perish but have everlasting life” (John 3:16). There is no greater love than that (John 15:13). 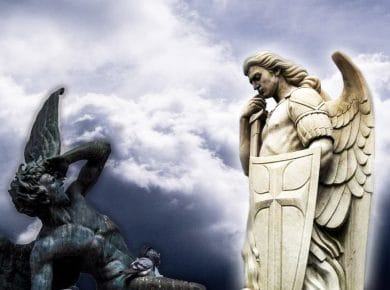 Table of Contents Michael and LuciferChrist differs from the angelsMichael in the BibleThe ArchangelMichael Fights SatanThe Captain of God’s Army is WorshipedThe Great PrinceConclusion This answer is also available in:…
View Answer

This answer is also available in: Español“For we have not an high priest which cannot be touched with the feeling of our infirmities; but was in all points tempted like…
View Answer