The Pharisees understood exactly what the people meant when they called Jesus “Son of David” but they hardened their hearts with pride and rejected the Messiah. The Israelites, afflicted by the Roman rule at the time of Christ, looked with hope to the restoration of their kingdom to the independence and prosperity of David’s prosperous reign. Jesus failed to give them the worldly honor they were so eager to have (Matthew 21:15) and so they planned to kill Him (Luke 19:47).

Jesus tried to teach them that the Messiah is more than the physical son of David. This is specifically seen in Mark 12:35-37, “Then Jesus answered and said, while He taught in the temple, “How is it that the scribes say that the Christ is the Son of David? For David himself said by the Holy Spirit: ‘The Lord said to my Lord, Sit at My right hand,Till I make Your enemies Your footstool.’ Therefore David himself calls Him ‘Lord’; how is He then his Son?….” The religious leaders couldn’t answer the question. Jesus was basically trying to teach them that if He is David’s Lord, He must be greater than David.

John the revelator summed it up by saying that Jesus is both the Creator of David and the Descendant of David: “I am the Root and the Offspring of David” (Revelation 22:16). 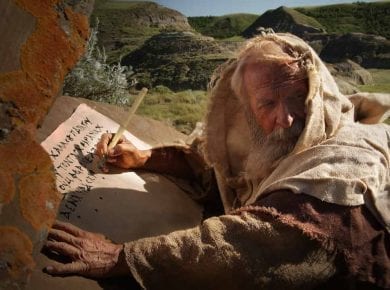 This answer is also available in: हिन्दीJohn was one of the twelve disciples of Jesus. He was the son of Zebedee, Salome (Joanna), and the brother of James, ( one…
View Answer

This answer is also available in: हिन्दीThe passage regarding judgement day that you referred to can be found in Matthew 24:36): “But of that day and hour knoweth no man,…
View Answer