Familiar spirit (’oboth) literally means “[skin] bottles.” This term was assigned to mediums due to their unnatural voice (Isaiah 8:19). Their unusual voice might have been produced through speaking through a bottle  The word ’oboth is feminine, signifying that spirit mediums were generally women.

A “familiar spirit” accompanies “one who conjures spells, or a medium, or a spiritist, or one who calls up the dead” (Deut. 18:11). A medium may practice magic, spells and witchcraft. They also claim to contacts the dead and to have wisdom from supernatural sources.

The Lord clearly warned His people against consulting with mediums or those with a familiar spirit. “When you come into the land which the LORD your God is giving you, you shall not learn to follow the abominations of those nations.  There shall not be found among you anyone who makes his son or his daughter pass through the fire, or one who practices witchcraft, or a soothsayer, or one who interprets omens, or a sorcerer,  or one who conjures spells, or a medium, or a spiritist, or one who calls up the dead.  For all who do these things are an abomination to the LORD…” (Deuteronomy 18:9-12).

He added, “Give no regard to mediums and familiar spirits; do not seek after them, to be defiled by them: I am the LORD your God” (Leviticus 19:31). By consulting the spirits of devils, men would ultimately become like them and believe their lies. When King Saul cut himself off from God by disobedience (1 Sam. 28:6), he turned to demons for guidance. This was the ultimate foolishness to forsake God, the source of life, and seek the devil who kills (John 10:10).

The dead cannot be summoned

The Bible teaches that the living can’t consult with the dead. For “the dead know not any thing” (Eccl. 9:5). The chapter goes one to say, “Also their love, and their hatred, and their envy, is now perished; neither have they any more a portion for ever in any thing that is done under the sun” (vs. 6).

The deceased are sleeping unconsciously awaiting to be awakened at the Day of Resurrection (1 Thessalonians 4:13-17). For more on the state of the dead, check The Intermediate State.

Demons appear as the dead. Thus, Satan will appear as an angel of light (2 Corinthians 11:14). Furthermore, he will even more shockingly, attempt to appear as Christ Himself (Matt. 24:23, 24).  Therefore, any “spirit” claiming to be a deceased loved one is really a devil impersonating them. For this reason, God’s people should reject any miracle worker who claims to receive special “light” through contacting the spirits of the dead.

The Lord advised His children, “And when they say to you, “Seek those who are mediums and wizards, who whisper and mutter, should not a people seek their God? Should they seek the dead on behalf of the living? To the law and to the testimony: If they do not speak according to this word, it is because there is no light in them” (Isaiah 8:19-20).

Isaiah directs men away from the words of devils to God’s Word and His prophets who bore His “testimony.” People should seek the Scriptures as the guide to truth and the standard to righteous living. God has revealed Himself in His Word and only in Him is there peace and knowledge of the future (John 14:27, Isa. 46:9-10). Therefore, if anyone claims to have power from spirits or whose claims are not in harmony with Scripture have “no light” (Isa. 50:10, 11). There are two choices before us, may we choose life and blessing.

“Blessed are they that do his commandments, that they may have right to the tree of life, and may enter in through the gates into the city. For without are dogs, and sorcerers, and whoremongers, and murderers, and idolaters, and whosoever loveth and maketh a lie” (Revelation 22:14-15).

This answer is also available in: हिन्दीGod did not create the devil. He created a perfect angle his name was Lucifer. Lucifer was sinless as were all other angels. He was a…
View Answer 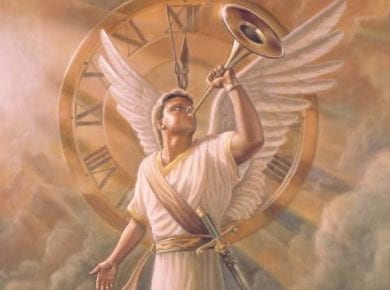 This answer is also available in: हिन्दीThe apostle John saw in vision the “four angels standing at the four corners of the earth, holding the four winds of the earth,…
View Answer