While tradition suggests that Peter met his violent death at Rome, there is no reference in the Bible for that except one hint that is found in 1 Peter 5:13 as the name “Babylon” suggests. The clause in that verse reads literally, “she that is in Babylon salutes you.”

And since there is no historical evidence that supports the idea that Peter ever ministered in literal Babylon, we can conclude that Peter was referring to Rome in his letter. It is a known fact that the early Christians often used the title “Babylon” to refer to the Roman capital, to avoid political punishments. The apostle John shows that in the following verse: “And another angel followed, saying, “Babylon is fallen, is fallen, that great city, because she has made all nations drink of the wine of the wrath of her fornication” (Revelation 14:8).

Bible commentators agree that Peter in his first epistle 5:13 used the term Babylon as a covered reference to Rome. The apostle Peter went to Rome towards the end of his life. And his first epistle displays the existence of an unfriendly attitude toward Christians there.

For he wrote: “Beloved, do not think it strange concerning the fiery trial which is to try you, as though some strange thing happened to you;  but rejoice to the extent that you partake of Christ’s sufferings, that when His glory is revealed, you may also be glad with exceeding joy.  If you are reproached for the name of Christ, blessed are you, for the Spirit of glory and of God rests upon you. On their part He is blasphemed, but on your part He is glorified” (1 Peter 4:12–15; also 2:12 ). This may suggest the time of Nero’s persecution, which began in A.D. 64.

Also, the fact that there is no reference to Peter’s presence in Rome in Paul’s letters suggests that Peter did not arrive to Rome until “about the time of Paul’s final arrest,” which was about A.D. 66. 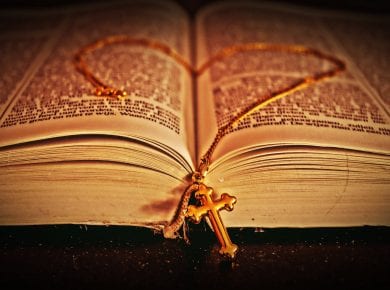 This answer is also available in: हिन्दीSome claim that Isaiah 53 doesn’t point to the future Messiah. They base their assumption on the fact that Isaiah wrote chapter 53 in…
View Answer

This answer is also available in: हिन्दीQuestion: To me, Matthew 18:23-35 seems to teach that people who are truly saved will have their salvation taken away from them and be…
View Answer