According to the Bible the Amorites are the descendants of one of the sons of Canaan (Genesis 10:15–16). They were also named Amurra or Amurri. This powerful group of people occupied a territory from the border of Egypt to Babylonia during the patriarchal age. They were the founders of the First Dynasty of Babylon, of which Hammurabi, the great was the most famous king.

The available evidence shows that they infiltrated Mesopotamia, Syria, and Palestine in the early part of the second millennium B.C. and replaced the existing ruling classes in those countries. By the time the Hebrews invaded the country, only remnants of the formerly powerful Amorite population could be found (Numbers 21:21).

Moses overcame two kings of the Amorites named Sihon and Og (Deuteronomy 31:4). King Og, was one of the remnant of the giants (Deuteronomy 3:11) who were the ancient people that lived in that region on both sides of the Jordan. Joshua later defeated five Amorite kings when the Lord made the sun to stand still to lengthen the day and give additional time for the total destruction of the enemies of Israel (Joshua 10:10; Joshua 11:8). The Amorites worshiped the god Baal and the goddess Ashtoreth as representations of the sun and the moon, respectively. The miracle of literally making the sun and moon stand still proved that these were subject to the God of Israel, the one and only true God (Joshua 10:12).

The last mention of the Amorites is found in Amos 2:10 where God declared it was He who gave the Israelites the land of the Amorites as an inheritance, as He promised Abraham.

This answer is also available in: हिन्दीLike today, Bible characters were also called by different names. Names were given in the Bible to identify different things like ethnicity (Doeg the…
View Answer 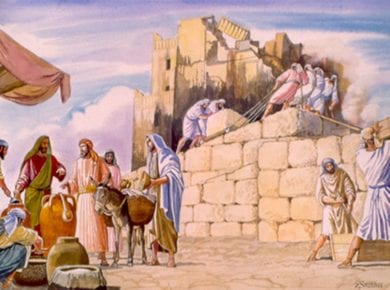 Table of Contents PositionThe Old TestamentLineageProphecyThe New Testament This answer is also available in: हिन्दीPosition Zerubbabel was the grandson of Jeconiah, penultimate king of Judah (Haggai 1:1). He was a…
View Answer