The first converts to Christianity were Jews who observed the Jewish rituals. But when Paul and Barnabas reached out to the gentiles and didn’t require the converts to be circumcised, the Jews were shocked. For they didn’t expect the Gentiles to join the church without first having to become full proselytes to Judaism. So, the Jews demanded that those who joined the church by baptism, should be circumcised.

The Judaizers claimed that circumcision was taught in the law, and that if it was rejected, the whole law would be violated. They were not ready nor willing to see the true relationship between Christ and the law. And their claims continued to trouble Paul’s ministry among the gentiles, and left its stain on most of his writings.

The decree of the council of Jerusalem

The issue of Circumcision was studied and addressed by the Council of Jerusalem under the guidance of the Holy Spirit. The council consisted of Peter, John, and James (the Lord’s brother (Gal. 2:9), Paul, Barnabas, the elders (Acts 11:30), and the other apostles. And they declared, “that we should not trouble those from among the Gentiles who are turning to God, but that we write to them to abstain from things polluted by idols, from sexual immorality, from things strangled, and from blood” (Acts 15:19, 20).

The end of the rituals that pointed to Christ

For years Jewish Christians continued to observe the Temple rituals (yearly sabbath feasts, new moon holidays and circumcision), and even Paul himself did that when he was at Jerusalem (Acts 20:16; 21:18–26). But later it was shown to him that many of these rituals were “shadows” pointing to Christ and His ministry. Once His mission was finished, they were no longer binding (Col. 2:11–20; Heb. 9:1–12).

The church did not realize that the ceremonial laws pointing to Christ were fulfilled in Him, and that the ethnic symbols of the Jews like circumcision were no longer meaningful. The spirit of legalism that served as a wall between Jew and Gentile needed to be abolished (Eph. 2:13–16). And now both Jews and Gentiles can equally be saved through Christ and there was no need to keep the rituals that identified the Jews  (Rom. 10:11, 12; Col. 3:10, 11).

This page is also available in: हिन्दी (Hindi)After examining the different denominations and churches, we find that the apostolic church was the purest church that ever existed. But Paul stated…
View Answer 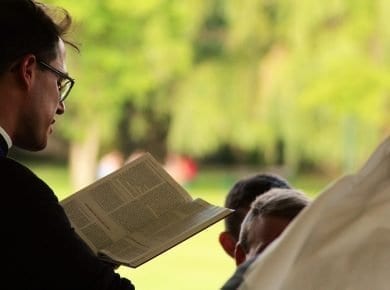 This page is also available in: हिन्दी (Hindi)The Bible tells us that God gave His children gifts, “He gave some, apostles; and some, prophets; and some, evangelists; and some, pastors…
View Answer