After the Pentecost, the number of the disciples was multiplying. And there arose a complaint against the Hebrews by the Hellenists, because their widows were neglected in the daily distribution. So, the apostles made the decision to call the believers to select seven men to carry on this job.

The apostles said, “It is not desirable that we should leave the word of God and serve tables. Therefore, brethren, seek out from among you seven men of good reputation, full of the Holy Spirit and wisdom, whom we may appoint over this business; but we will give ourselves continually to prayer and to the ministry of the word” (Acts 6:3,4).

The apostle’s request pleased the believers. And they chose Stephen, Philip, Prochorus, Nicanor, Timon, Parmenas, and Nicolas. Tradition tells us that Stephen and Philip were both of the Seventy that were sent into every city and village to proclaim that the Messiah had come (Luke 10:1–11). They probably also went to Samaria (Luke 10:1) because Hellenistic Jews were better accepted there than were Palestinian Jews (Acts 8:5).

Paul visited Philip in Caesarea (Acts 21:8) where he may have been a leader of the church there. But nothing is known about Prochorus, and Nicanor, and Timon, and Parmenas. As for Nicolas, he was a “proselyte of righteousness,” one who had completely accepted Judaism.

These deacons were to look after the spiritual needs of the poor; they were to demonstrate carefulness, discretion, economy, and wisdom in their work. Although these men were referred to merely as “the seven” (Acts 21:8), their functions were clearly equivalent to ministry of the deacons later described by Paul.

The Qualifications of Deacons

“Likewise deacons must be reverent, not double-tongued, not given to much wine, not greedy for money, holding the mystery of the faith with a pure conscience. But let these also first be tested; then let them serve as deacons, being found blameless. Likewise, their wives must be reverent, not slanderers, temperate, faithful in all things. Let deacons be the husbands of one wife, ruling their children and their own houses well. For those who have served well as deacons obtain for themselves a good standing and great boldness in the faith which is in Christ Jesus” (1 Timothy 3:8-13).

According to history, in some churches, as at Rome, the number of deacons was later fixed at seven (Eusebius Ecclesiastical History vi. 43. 11). The council of Neo-Caesarea (A.D. 314; Canon 14) called for seven deacons in a locality. Many Bible analysts believe that the seven men selected in Acts 6 is parallel to the “elders” mentioned in Acts 11:30; 14:23 and onward. And in later times, at least, seven was the number of persons called upon to manage public business in Jewish towns (Talmud Megillah 26a, Soncino ed., p. 157).

This answer is also available in: हिन्दीChanting is defined as reciting something in a monotonous repetitive tone. There are different types of chanting, from simple to complex ones, with different…
View Answer 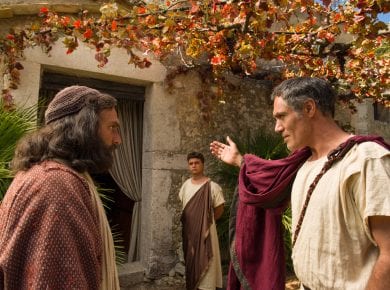 This answer is also available in: हिन्दीIn Jewish eyes Cornelius was a Gentile, for he was uncircumcised. Subsequently, his conversion (Acts 10) marked a new phase in the growth of…
View Answer