This man is usually spoken of as Simon Magus, “sorcerer,” or “magician.” According to Justin Martyr (First Apology 26) he was born at Gitto, a village of Samaria.  He was known for using sorcery or one “who formerly was practicing magic in the city” (Acts 8). “Magic” refers to the arts practiced by the Magi of the East, who claimed to be enchanters, astrologers, diviners, and interpreters of dreams.

Simon bewitched the people and amazed the population of Samaria who were superstitiously impressed by the so-called miracles (v. 9). His deceptions met with great success (v. 10), for every class of people believed in him. Irenaeus (Against Heresies i. 23; ANF, Vol. 1 p. 348) says of Simon Magus that “he was glorified by many as if he were a god. … He represented himself, in a word, as being the loftiest of all powers.”

But the power of Philip’s message proved stronger than the fascination of Simon’s magic (v. 12). And Simon was impressed by the miracles that Philip did (v. 6); he felt himself to be in the presence of a Power infinitely higher than his own. Although he accepted Philip’s statements, he failed to develop a personal faith. And although he got baptized, he remained still in “iniquity” (Acts 8:23). While the people were won by Philip’s preaching, Simon was attracted by the wonders that he saw.

Simon was baptized by Philip ( v.13) but the apostles’ hands had not been laid upon him, and he had not received the Spirit. When he saw that his fellowers were being endowed with abilities far greater than his own (v. 17), he desired the power that such possession would bring. So, he offered money to Peter and John (v. 18), hoping that he would be able to purchase what he had not freely received. Such conduct revealed the wicked character of his faith and his wrong motives

Peter told him, “Thy silver be together with thee, for perdition…And Peter exhorted him to “Repent…and pray God if perhaps the thought of your heart may be forgiven you” (v. 20,22). Then Simon answered, (v. 24) “Pray to the Lord for me, that none of the things which you have spoken may come upon me.” He showed by the nature of his request that he is not moved by genuine repentance but simply by fear from reaping the consequences of evil. There is no record in the NT of a later repentance on Simon’s part, and it may therefore be assumed that he remained unconverted.

This answer is also available in: हिन्दी“Who is he that condemneth? It is Christ that died, yea rather, that is risen again, who is even at the right hand of…
View Answer 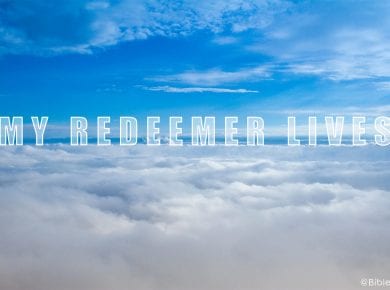 This answer is also available in: हिन्दी“For I know that my Redeemer lives, and He shall stand at last on the earth; and after my skin is destroyed, this I know,…
View Answer