The book of Revelation clearly states where Satan once lived, where he lives now and where he will be in the future. “And there was war in heaven: Michael and his angels fought against the dragon; and the dragon fought and his angels,  And prevailed not; neither was their place found any more in heaven. And the great dragon was cast out, that old serpent, called the Devil, and Satan, which deceiveth the whole world: he was cast out into the earth, and his angels were cast out with him” (Revelation 12:7-9).

Satan once lived in heaven

As seen in the above verses, Satan once lived in heaven. This was when he was called Lucifer and was created to serve God. “How art thou fallen from heaven, O Lucifer, son of the morning! how art thou cut down to the ground, which didst weaken the nations!” (Isaiah 14:12). Satan fell from heaven for his own selfish ambition and pride (Isaiah 14:13-15).

This is further seen in the book of Ezekiel. “Thou art the anointed cherub that covereth; and I have set thee so: thou wast upon the holy mountain of God; thou hast walked up and down in the midst of the stones of fire. Thou wast perfect in thy ways from the day that thou wast created, till iniquity was found in thee. By the multitude of thy merchandise they have filled the midst of thee with violence, and thou hast sinned: therefore I will cast thee as profane out of the mountain of God: and I will destroy thee, O covering cherub, from the midst of the stones of fire. Thine heart was lifted up because of thy beauty, thou hast corrupted thy wisdom by reason of thy brightness…” (Ezekiel 28:14-17).

Jesus Himself states that He watched Satan fall from heaven. “ And he said unto them, I beheld Satan as lightning fall from heaven” (Luke 10:18). Thus, we can know for sure that Satan, once called Lucifer, dwelt in heaven until he sinned against God and was cast to the earth.

As seen in the verses in Revelation 12, Satan was cast to the earth. Satan not only lives here but is also constantly on the go. “And the Lord said unto Satan, Whence comest thou? Then Satan answered the Lord, and said, From going to and fro in the earth, and from walking up and down in it” (Job 1:7). See also 1 Peter 5:8.

The book of Revelation also states that Satan has a seat in the earth. “I know thy works, and where thou dwellest, even where Satan’s seat is: and thou holdest fast my name, and hast not denied my faith, even in those days wherein Antipas was my faithful martyr, who was slain among you, where Satan dwelleth” (Revelation 2:13).

This place where Antipas was martyred appears to be where Satan’s seat is, however, there is no verse in the Bible or historical record as to the exact location where this is. It may be that this seat is Satan’s headquarters. Regardless of exactly where it is on earth, it is clear that he sits, dwells and moves here on earth. Satan also has the ability to be in the air in our atmosphere (Ephesians 2:1, 2).

“…Woe to the inhabiters of the earth and of the sea! for the devil is come down unto you, having great wrath, because he knoweth that he hath but a short time” (Revelation 12:12).

The Bible says that Satan has “but a short time.” He knows his destruction is coming soon. At the second coming of Christ, Satan will be bound to the bottomless pit for a thousand years.

Once the thousand years are done, Satan will go out for one last attempt to attack God and His people. However, he will be cast into the lake of fire (Revelation 20:7-10).

Many have an idea that Satan lives in hell now or that he is the ruler of the underworld. However, this is not so. Jesus calls him “the prince of this world” (John 12:31). Satan is here on earth and he is alive and well.

Satan is the greatest of all liars (John 8:44). One of his greatest lies is that he does not exist or that he lives in hell, separate from people on the earth. This is a dangerous misconception, as it gives people the idea that they do not have an enemy to be careful of. As a military general in the forces of darkness, he could have no better advantage. God’s people need to be on guard against Satan, which literally means “enemy,” as he seeks only to steal, kill and destroy (John 10:10).

Jesus is the great commander of heaven (Revelation 19:11-16) and calls His people to,”Put on the whole armour of God, that ye may be able to stand against the wiles of the devil. For we wrestle not against flesh and blood, but against principalities, against powers, against the rulers of the darkness of this world, against spiritual wickedness in high places” (Ephesians 6:11-12).

God’s people need to know where Satan, the enemy, lives so that they can resist (James 4:7) and overcome him. “…Now is come salvation, and strength, and the kingdom of our God, and the power of his Christ: for the accuser of our brethren is cast down, which accused them before our God day and night. And they overcame him by the blood of the Lamb, and by the word of their testimony; and they loved not their lives unto the death” (Revelation 12:10-11).

It is also important to know his end that we do not have any part in it. Rather, God’s people will have a part in the destruction of Satan. “And the God of peace shall bruise Satan under your feet shortly. The grace of our Lord Jesus Christ be with you. Amen” (Romans 16:20).

This page is also available in: العربية (Arabic) हिन्दी (Hindi)The devil did deceive Eve with a question that looked innocent but was full of deceit “Has God indeed said, ‘You shall…
View Answer 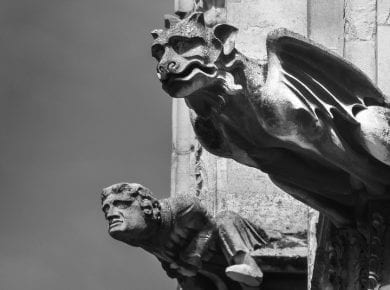 This page is also available in: العربية (Arabic) हिन्दी (Hindi)A demon is a fallen angel. Lucifer, the highest angel, rebelled against God and many angels joined him. “And war broke…
View Answer