Question: Why did Jesus permit the demons to go into the swine in the Gadarene demoniac story?

Answer: Jesus once encountered a man who was possessed of demons on the eastern shore of the Sea of Galilee. When the Lord commanded the demons to leave the man, they requested permission to enter a herd of swine feeding in the area. Christ permitted them. And the demons entered the swine and they hurled down into the sea and drowned.

Why did the Lord allow the demons to get into the swine?

1-Christ is a Divine Being who is sovereign over the entire creation. All the creation belongs to Him (Colossians 1:16). God said: “For every beast of the forest is mine, And the cattle upon a thousand hills” (Psalm 50:10). That would include swine, too!

2-Swine were unclean according to God’s health regulations (Leviticus 11). It is possible that the owners of these pigs were Jews, engaged in an unlawful enterprise. If such was the case, the Savior’s economic rebuke certainly would have been needed. Whatever the case, these herders were absorbed in business and profit, not caring for their great need to the spiritual eternal matters. They needed an awakening.

3-There are things that transcend the material and hardship can have a benevolent result in the final ordering of one’s spiritual affairs. It was Satan’s purpose to turn the people of this region against the Savior by making it appear that He was responsible for the destruction of their property. But the ministry of the transformed men who previously had been known throughout the district as demoniacs, together with news of the herd of swine that perished in the sea to confirm their story, served as nothing else could possibly have done to turn the people of the region to God (vs. 19, 20).

This answer is also available in: العربية हिन्दीQuestion: Did Jesus contradict the OT (1 Samuel 21:1-2), when He said that Abiathar gave David the showbread to eat instead of Ahimelech?…
View Answer 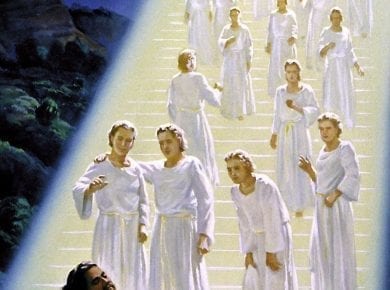 This answer is also available in: العربية हिन्दीThe story of Jacob’s Ladder is recorded in Genesis 28:10-22. After Jacob deceived his father Isaac and took the birth right blessing from…
View Answer