When Israel left Egypt, a large multitude, comprising mainly of Egyptians, joined them. The Scripture names them as the “mixed multitude,” which means literally, a “numerous mingled throng” (Ex. 12:38; Num. 11:4).

The identity of this group is not given in the Bible. Some believe they are native Egyptians that were awe-struck by the power of the God of the Hebrews, and desired to share the blessings of the Hebrews so they joined them. Others believe they simply wanted to escape the oppression of the Pharaoh’s. And some believe they could be the last group of the Hyksos or other Semites who had been imprisoned by the Pharaohs, and at the exodus, they seized the chance to escape Egypt.

This multitude was considered a “rabble” and was a cause of continual distress and rebellion to Israel. They were the ones who started the demand for flesh food, which resulted in the death of thousands (Num. 11:4–6, 18–20, 31–33). Even though they saw firsthand God’s daily miracle of providing manna the bread of angels from heaven, they were ungrateful to God and demanded more.

It is possible that this mixed multitude wanted also to continue his pagan sacrificial practices as they did in Egypt where they practiced the most immoral forms of heathenism. Among these practices was the worship of demons (Lev. 17:7) and offering sacrifices themselves to these demonic entities. These sins they spread among the Israelites and started to corrupt the people, and a reformation was needed by God.

So, the Lord commanded His people saying, ‘Whatever man of the house of Israel, or of the strangers who dwell among you, who offers a burnt offering or sacrifice, and does not bring it to the door of the tabernacle of meeting, to offer it to the LORD, that man shall be cut off from among his people” (Leviticus 17:8).

The Lord intended to separate the Israelites from the corrupting influences of the Egyptians (Leviticus 18:3). Before Sinai, Israel was without an appointed priesthood. The father was the priest of his family; but now God ordered the holy priests to be the only ones that would offer the sacrifices to protect the people from the corrupt pagan Egyptian practices.

The fear of the Lord is that reverent attitude compounded of love, awe, and gratitude that distinguishes men who have realized their own unworthiness and have found salvation in God’s…
View Answer 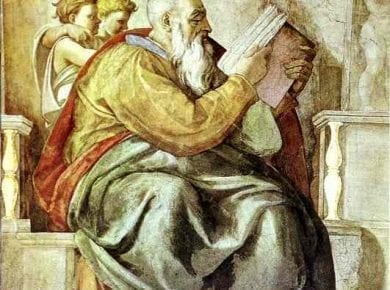 Zechariah was one of the minor prophets of the Old testament. The name (Heb. Zekaryah), means “Yahweh remembers,” or “Yahweh has remembered.” This prophet was probably a Levite or a…
View Answer