“Then I saw another angel ascending from the east, having the seal of the living God. And he cried with a loud voice to the four angels to whom it was granted to harm the earth and the sea,  saying, “Do not harm the earth, the sea, or the trees till we have sealed the servants of our God on their foreheads.”  And I heard the number of those who were sealed. One hundred and forty-four thousand of all the tribes of the children of Israel were sealed” (Revelation 7:2-4).

During the time of Jesus’ first coming, the twelve disciples were a type of “special forces” for spreading the truths of the kingdom. After three and half years of training with Jesus, the disciples were used by God to spread the good news of the gospel to all the world. They fought the darkness with the truth and caused a great revival and expansion of the Christian faith.

But the book of Revelation tells us of a another special forces, a vast “army” of 144,000. They have a special relationship with the Lamb and they are sealed with special name. They also sing a special song. The 144,000 are very important because they are commissioned with the greatest mission in the last days: to prepare the world for Jesus’ Second Coming.

During the early church, God poured out His Spirit on the twelve apostles plus the 120 that were in the upper room. Through their ministry, thousands were baptized. Today, God is going to fill the 12 times 12,000 with His Spirit in the form of the latter rain to reach the world (Joel 2:23).

Who will be part of this holy army at the end of time? The Bible tells us that this special group is comprised of 12,000 from each of the twelve tribes of Israel which are Judah, Reuben , Gad , Asher, Naphtali, Manasseh, Simeon, Levi, Issachar, Zebulun, Joseph, and Benjamin. And since the ten norther tribes of Israel were conquered by the Assyrians and dispersed hundreds of years before the birth of Jesus, it is unlikely that Revelation is speaking of 12,000 leaders from these literal ancient Hebrew tribes. Frequently, the name used in the book of Revelation have a symbolic meaning. Thus, the 144,000 will be composed of believers in Christ from all around the world.

This answer is also available in: العربية हिन्दीThe 144,000 in the Bible The 144,000 is mentioned in the following references in the Bible: “And I heard the number of those…
View Answer 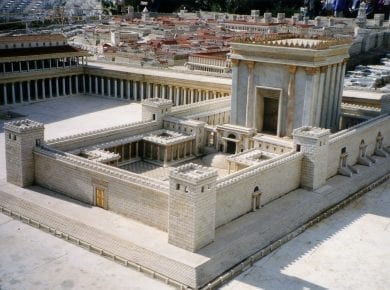 This answer is also available in: العربية हिन्दीContemporary Christian “Zionists” have written books on the rebuilding of the temple in Israel including Thomas Ice, Randall Price, Grant Jeffrey, Hal Lindsey,…
View Answer