There is no mention in the Bible that apostle Paul was married nor that he had children. In his letters, Paul said that he had a preference to the unmarried state for his evangelistic work. “I wish that all of you were as I am” (1 Corinthians 7:7). And this preference was due to the persecution of the time (1 Corinthians 7:26). Many hardships had to be endured, and thus an evangelist was able to do more work when not tied to a family and children.

Some take the following verse as an indication that Paul was once married: “Don’t we have the right to take a believing wife along with us, as do the other apostles and the Lord’s brothers and Cephas?” (1 Corinthians 9:5). It was the general practice for the apostles to be married. There are reasons why the apostles chose to go on their mission journeys with their wives. In ancient East, it was not easy for men to freely communicate with women so the wives of the apostles could easily make such contacts. In addition, the wives served as helpers in times of sickness and persecution.

Those that promote the idea that Paul was once married say that Paul experienced the value of marriage since he taught in 1 Timothy 3:1-13 and Titus 1:6-9, that elders, bishops, overseers, and deacons should be married. He also said that a religious leader, “must manage his own family well” (1 Timothy 3:4,12), and “his children obey him with proper respect” (1 Timothy 3:4; Titus 1:6).

Paul was part of Sanhedrin, an office that required its members to be married. Paul says of his role in the Sanhedrin: “I was advancing in Judaism beyond many Jews of my own age and was extremely zealous for the traditions of my fathers” (Galatians 1:14). Many have thus concluded that the apostle’s wife may have passed away before he started his ministry. These points are speculation, and as mentioned previously, there is no direct Bible verse or historical record that Paul was married or had children. 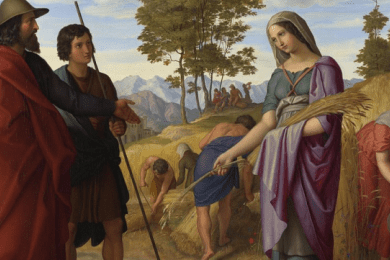 Boaz asked the nearer of kinsman of Ruth to redeem her by marrying her on behalf of her saying, “Naomi, who has come back from Moab, is selling the piece…
View Answer