Pergamos is also known as Pergamum (Revelation 2:12). This city had been the capital of the Roman province of Asia for two centuries. King Attalus III, gave it, together with the kingdom of Pergamum, to Rome in 133 b.c. Since the early 3rd century b.c. the city of Pergamum had been the center of cultural and intellectual life of the Hellenistic world.

The meaning of the name Pergamos is not clear, but “citadel,” or “acropolis,” is one of its derived meanings. Pergamum in 29 b.c. had become the site of the first cult of a living Roman emperor. A temple there was built and dedicated to the joint worship of the goddess Roma (a personification of the spirit of the empire) and the emperor Augustus.

Pergamos was one of the seven churches that John wrote about in Revelation 2:12-17. At the very time John wrote his message to the church of pergamos, the true believers were suffering persecution for refusing to worship the emperor Domitian (a.d. 81–96), who wanted to be worshiped as “lord and god.” Thus, its meaning as the place “where Satan’s seat is” (v.13) is true.

The Pergamos period of church history started at the time of Constantine’s conversion to Christianity in 323 or 325 and ended in 538. Constantine tried to blend paganism and Christianity in as many points as possible in order to unite the diverse elements within his empire to give it power and stability.

It was during this time that the papacy won the religious and political leadership in Western Europe, thus the devil confirmed his “seat” within the church. This era may be termed the Age of Popularity. The prosperous position of the church made it fall into the temptations that come with ease and popularity which eventually led to the corruption of faith.

To the faithful who were being exposed to heathenism in the church, God sent this message “Repent; or else I will come unto thee quickly, and will fight against them with the sword of my mouth” (Revelation 12:16). 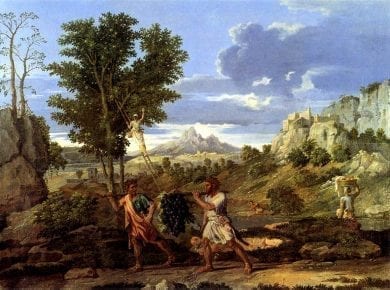 This answer is also available in: हिन्दीQuestion: Why were Joshua and Caleb the only ones that entered the Promised Land? Answer: Joshua and Caleb were chosen with ten other men…
View Answer

This answer is also available in: हिन्दीBible critics and skeptics have often pointed that Luke’s record of “Lysanias the tetrarch of Abilene” (Luke 3:1) is not referenced in history. They…
View Answer