In the NT, the Lord is presented as the foundation upon which the church rests: “Therefore whoever hears these sayings of Mine, and does them, I will liken him to a wise man who built his house on the rock” (Matt. 7:24). Paul affirmed the same truth saying, “For no other foundation can anyone lay than that which is laid, which is Jesus Christ” (1 Cor. 3:11; 1 Corinthians 10:4), and upon which the individual Christian is to establish his house of faith.

The Catholic Church teaches that Peter was the rock upon whom their church was build and that he was given the keys to the kingdom according to their interpretation of Matthew 16: 18,19. “And I say also unto thee, that thou art Peter, and upon this rock I will build my church; and the gates of hell shall not prevail against it. And I will give unto thee the keys of the kingdom of heaven: and whatsoever thou shalt bind on earth shall be bound in heaven: and whatsoever thou shalt loose on earth shall be loosed in heaven” (Matthew16: 18,19).

But could Peter qualify to be the Rock? Let us look to Scripture:

1-The gates of Hell prevailed against Peter when He allowed Satan to speak through him (Matthew16:22). Then Jesus answered Peter saying “Get thee behind me, Satan thou art an offense unto me” (Matthew.16:23).

2-The gates of Hell prevailed again against Peter when he denied his Lord three times (John 18:25).

3-Peter was fallible, as Paul had to rebuke him for his error of not walking uprightly even after Peter repented from denying Christ (Galatians 2: 11-16).

Peter was an erring human but the church of God was built rather on the faith in Christ that he expressed when he said, “Thou art the Christ, the Son of the living God” (Matthew 16:16). By faith in God can the church prevail and triumph over all the powers of darkness. And Peter, himself emphatically confirmed in his teachings that the “rock” of which was spoken of referred to Jesus Christ (Acts 4:8-12; 1 Peter 2:4). 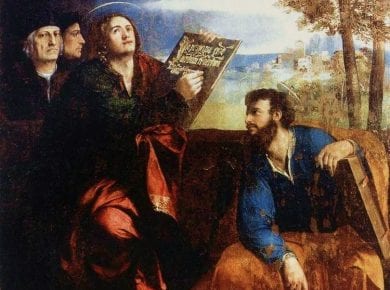 To answer this question, we simply compare Scripture with quotes from Catholic publications.  It is then up to the reader to decide for themselves what to believe. Please read our…
View Answer