The Bible teaches that Jesus and the Father are clearly separate and distinct persons.

Genesis starts to shed light on the Godhead. It says, “And God said, Let us make man in our image, after our likeness” (Genesis 1:26). Here, the Hebrew word for God is Elohim. This word is a plural noun that is used more than 2,700 times in the Old Testament. It is clear that inspired authors preferred to use Elohim about 10 times more than the singular form “El” when they described God.

In the book of Daniel, we see a picture of the Father and the Son as two separate persons. “I was watching in the night visions, And behold, one like the Son of Man, coming with the clouds of heaven! He came to the Ancient of Days, and they brought Him near before Him” (Daniel 7:13). In this verse, the Son of man, Jesus, is seen coming before the Ancient of Days—who is, obviously, God the Father.

We read about the three persons of the Godhead clearly at the baptism of Jesus. “And Jesus, when he was baptized, went up straightway out of the water: and, lo, the heavens were opened unto him, and he saw the Spirit of God descending like a dove, and lighting upon him: And lo a voice from heaven, saying, This is my beloved Son, in whom I am well pleased” (Matthew 3:16, 17).

Then, we see the Father speaking about the Son at the Transfiguration. “And a cloud came and overshadowed them; and a voice came out of the cloud, saying, “This is My beloved Son. Hear Him!” (Mark 9:7).

Before His ascension to heaven, Jesus Himself taught us to baptize in the three distinct and separate Names of the Godhead: “Go ye therefore, and teach all nations, baptizing them in the name of the Father, and of the Son, and of the Holy Ghost” (Matthew 28:19).

The apostle John testified of heaven saying: “For there are three that bear record in heaven, the Father, the Word, and the Holy Ghost: and these three are one…” (1 John 5:7,8).

The apostle Paul affirmed that there were three divine persons “The grace of the Lord Jesus Christ, and the love of God, and the communion of the Holy Ghost, be with you all” (2 Corinthians 13:14). And he added, “How much more shall the blood of Christ, who through the eternal Spirit offered himself without spot to God, purge your conscience from dead works to serve the living God?” (Hebrews 9:14).

Also, John the Revelator spoke of the Father and the Son as distinct and separate from each other. “From the seven Spirits who are before His throne, and from Jesus Christ, the faithful witness, the firstborn from the dead, and the ruler over the kings of the earth. To Him who loved us and washed us from our sins in His own blood, and has made us kings and priests to His God and Father…” (Revelation 1:4–6 ).

Isa (Jesus) died on behalf of humans to satisfy the justice of God against their sin (1 Corinthians 15:3-4). Allah created humans perfect. But Adam and Eve fell to the temptation of…
View Answer 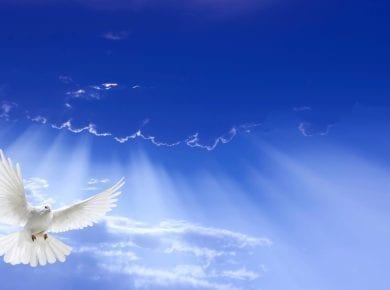