Nehemiah, was a trusted Jewish court official who worked for the Persian Empire. The name Nehemiah means “Yahweh has comforted.” He was one of the three leaders that were sent from Persia on a special mission to rebuild Jerusalem. When that city was destroyed by Nebuchadnezzar, Nehemiah reconstructed the walls (Nehemiah 1 &2), Zerubbabel rebuilt the temple (Ezra 3:8), and Ezra restored the worship of God.

The book of Nehemiah starts on April 2, 444 B.C. It mentions how he, who worked for King Artaxerxes, received report from Jerusalem by Hanani. This report revealed the miserable conditions in Jerusalem. As a result, he mourned, prayed, and fasted. Then, the king noticed his sadness and inquired about the reason. So, Nehemiah asked the Lord to help him give an answer. Then he said, “May the king live forever! Why should my face not be sad, when the city, the place of my fathers’ tombs, lies waste, and its gates are burned with fire?” (Nehemiah 2:3). So, the king asked him what do you request? So Nehemiah answered, “…I ask that you send me to Judah, to the city of my fathers’ tombs, that I may rebuild it” (V. 5).

The Lord put in the king’s heart to send his court official to rebuilt Jerusalem with letters for the governors of the region to give him a safe pass. In addition, the king ordered that timber will be provided for the temple, the city wall, and all his requests (V. 8). Nehemiah realized fully that all this was made possible by God. For the Lord granted him favor. And in turn, he offered the Lord the glory for his success (Ezra 8:18). When he reached Jerusalem, he stirred the inhabitants to work and they rose up to build the city.

God’s appointed man succeeded in obtaining a royal appointment as governor of Judea. And he completed the rebuilding of the city wall. This he did under continuing threats of violence. He served as governor for two terms, and proved to be an able administrator and religious leader. Nehemiah set a firm political, social, and moral foundation that was a great basis for the difficult times that followed.

The books of Ezra and Nehemiah

These are historical books which record the working of God’s divine plans in the restoration of the Jews and their right to exist as a nation. They show how a few people can do great things for God when led by God-fearing, sincere, unselfish, but brave determined leaders. Further, these books show how the prophecies of Isaiah and Jeremiah were fulfilled. They also provide evidence on how other prophecies, like Daniel 8 and 9, can securely be supported by history. 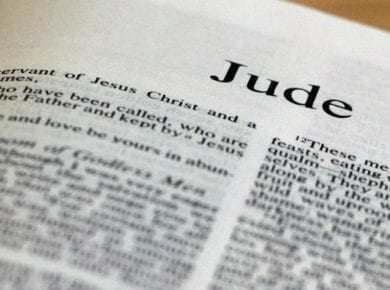 This answer is also available in: हिन्दीJude was one of the apostles of Christ. He is also the author of the book that bears his name. He  identifies himself as…
View Answer