Henry M. Morris, Ph. D. addresses this question in his article “Probability and Order Versus Evolution”:

“One of the strongest direct evidences for special creation is the existence of innumerable highly complex systems in the universe, systems composed of components occurring in a pattern of “order” rather than disorder. Creationists maintain that highly ordered systems could not arise by chance, since random processes generate disorder rather than order, simplicity rather than complexity and confusion instead of “information.”

For example, consider a series of ten flash cards, numbered from one to ten. If these are thoroughly and randomly mixed, and then laid out successively in a linear array along the table, it would be extremely unlikely that the numbers would fall out in order from one to ten. Actually, there are 3,628,800 different ways in which these numbers could be arranged, so that the “probability” of this particular ordered arrangement is only one in 3,628,800. (This number is “ten factorial,” written as 10!, and can be calculated simply by multiplying together all the numbers from one to ten.)

It is obvious that the probability of such a numerically ordered arrangement decreases rapidly as the number of components increases. For any linear system of 100 components in specified order, the probability is one in 100!, or one chance in 10158 (a number represented by “one followed by 158 zeroes”).

The truth is that a system requiring such a high degree of order could never happen by chance. This follows from the fact that probability theory only applies to systems with a finite possibility of occurring at least once in the universe, and it would be inconceivable that 10158 different trials could ever be made in our entire space-time universe.

Astro-physicists estimate that there are no more than 1080 infinitesimal “particles” in the universe, and that the age of the universe in its present form is no greater than 1018 seconds (30 billion years). Assuming each particle can participate in a thousand billion (1012) different events every second (this is impossibly high, of course), then the greatest number of events that could ever happen (or trials that could ever be made) in all the universe throughout its entire history is only 1080 x 1018 x 1012, or 10110 (most authorities would make this figure much lower, about 1050). Any event with a probability of less than one chance in 10110, therefore, cannot occur. Its probability becomes zero, at least in our known universe.

Thus, the above-suggested ordered arrangement of 100 components has a zero probability. It could never happen by chance…”

This answer is also available in: हिन्दी The Bible in Job 41 mentions that there was an animal called Leviathan. Based on the passage, this creature could be interpreted as…
View Answer 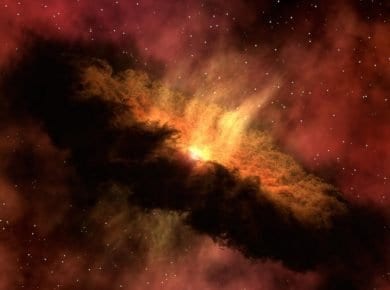 This answer is also available in: हिन्दीIn every cell there is the nucleus that contains the chromosomes that are microscopically small and carries the genes. Within the chromosomes is an…
View Answer