Most modern portrayals of Jesus in paintings or movies, present Him as a Western Caucasian man. The truth is that Jesus the boy grew up to adulthood (Luke 2:52) resembling an ordinary Middle Eastern Jewish man.

While the Bible doesn’t tell us how Jesus looked like, the book of Isaiah in the Old Testament, sheds some light saying, Jesus “had no beauty or majesty to attract us to Him, nothing in His appearance that we should desire Him” (Isaiah 53:2). Jesus had no special looks to attract the attention.

This was so that people may not to be attracted to Him by a display of physical beauty, but rather by the beauty of a righteous life. He walked among men as perfect Man, yet His true beauty shone from His nobility and goodness. And only those that were spiritually discerning could see His divinity shine through His humanity.

The prophet Isaiah also sheds light about His appearance at the crucifixion “His appearance was so disfigured beyond that of any man and his form marred beyond human likeness” (Isaiah 52:14). People stood in amazement that one so highly honored as the Son of God should have voluntarily humbled himself as Christ did in His mission to earth. Jesus veiled His divinity in humanity (Luke 2:48) in order that men might see His Father’s character. The religious leaders were perplexed that one who assumed no high honors, lived the humble life that Jesus lived, could be the Messiah of prophecy. And Jesus was not the kind of Messiah the Jews were interested in (Luke 4:29).

The fact that the scriptures and the writers of the gospels who saw Jesus didn’t describe His appearance tells us that this was not necessary for people to know. God doesn’t regard the appearance of men but only their hearts. “The LORD does not look at the things people look at. People look at the outward appearance, but the LORD looks at the heart” (1 Samuel 16:7).

This page is also available in: हिन्दी (Hindi)“For we have not an high priest which cannot be touched with the feeling of our infirmities; but was in all points tempted…
View Answer 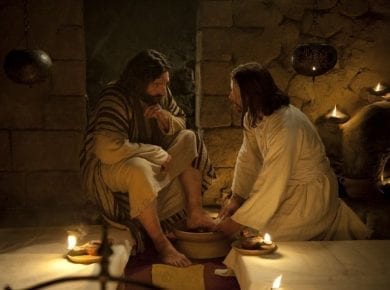 This page is also available in: हिन्दी (Hindi)According to Jewish practice, the washing of the master’s feet was one of the obligations of a foreign slave, but was not the…
View Answer