The Ten Commandments Commission, which is composed of Christian and Jewish leaders, designated May 7, 2006 as America’s first annual “Ten Commandments Day” to promote the supreme importance of the Law of God in our society. The Commission’s official website, www.tencommandmentsday.com, states:

“Recent court rulings have threatened the very fabric and foundation of our culture and faith. The Ten Commandments, which have served as the moral foundation and anchor of our great country, are systematically being removed from public places. Public displays of the Ten Commandments have been a powerful visual testimony to the fact that the United States of America is “one nation under God.” Their removal from public places shows that those with a secular humanist agenda are intent on destroying the moral heritage of our nation.

Those who care about traditional values cannot passively sit by and watch the removal of the very principles that made this country great. The Ten Commandments are the heart of all moral code and must be restored to the heart of our society.

We are inviting all Christians, churches, synagogues, ministry leaders, religious bookstores and everyone who is interested in preserving traditional values to join us in a national and global movement to restore the Word of God to our nation.”

Here are two objections about the Ten Commandments Commission:

First: While we believe absolutely in upholding the Ten Commandments as God’s Moral law (Exodus 20) for all people, there is a grave danger in enforcing this law by the civil powers of the state. Doing so will infringe upon the freedom of choice that God has given to all.

Please note that the Ten Commandments were written on 2 tables of stone (Exodus 31:18). The first table contains the first four commandments which concern our relationship with God (no other gods, no idols, reverence His Name, keep the Sabbath holy). The second table contains the last six commandments which elaborate on our relationship with our fellow man (honor parents, no murder, no adultery, no stealing, no lying, and no coveting). Only the commandments on the second tablet fall within the legitimate sphere of human governments. The first tablet–dealing with our relationship with God–lies outside the jurisdiction of earthly governments and should never be legislated or enforced on people. Christians have erred in the past by legislating Sunday laws (called ‘blue laws’) throughout American history. These laws still exist today in many states. In fact, the book of Revelation predicts that at the very end of time there will be “a national and global movement” which enforces the traditions of men (Sunday observance) upon society by civil laws (Revelation 13:15-17).

Christians should promote the Ten Commandments as God’s perfect standard of morality, but they should do it through love, not force. Jesus said,  “If you love Me, keep my commandments” (John 14:15). Jesus wants to write His law in our heart by the work of His grace (Hebrews 10:15, 16) and not by force.

Today, many wrongly teach that when Jesus Christ died on the cross, He abolished the Ten Commandments. Because the New Testament teaches that we are saved by grace, not by works (Romans 3:28 and Ephesians 2:8), some believe we are no longer obliged to keep the Ten Commandments. But the truth is that Jesus Christ lived, suffered, and died because humans broke God’s commandments. The New Testament itself clarifies that “sin is the transgression of the law” (1 John 3:4). Jesus declared,“Do not think that I came to destroy the Law or the Prophets. I did not come to destroy but to fulfill. For assuredly, I say to you, till heaven and earth pass away, one jot or one tittle will by no means pass from the law till all is fulfilled” (Matthew 5:17,18). So, the Ten Commandments law are still binding today (including God’s seventh day Sabbath –Saturday, Exodus 20:8-11).


Check out our Bible Answers page for more information on a variety of topics.

Table of Contents Revolutionary AgitatorWithout Tax Support for CaesarKing of the JewsMotive of the Jews This page is also available in: हिन्दी (Hindi)The gospel of Luke lists three charges that…
View Answer 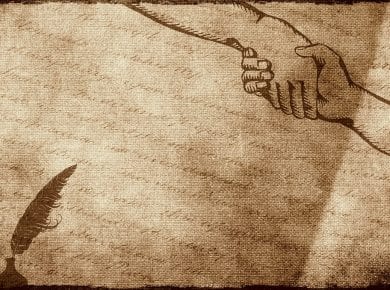 This page is also available in: हिन्दी (Hindi)A covenant is an agreement or contract. The word comes from the Hebrew verb “to bind,” or “to fetter.” It is used as…
View Answer