The papacy is by far the strongest religio-political power in the world. Nearly every leading country has an official ambassador or state representative at the Vatican. The pope is revered and welcomed by all countries. Former U.S.S.R. leader Mikhail Gorbachev said, “Everything which took place in Eastern Europe in recent years would have been impossible without the Pope’s efforts and the enormous role, including the political role, which he played in the world arena.”Toronto Star, March 9, 1992, p. A-1

And America is now looked upon as the number one military power and center of influence. “[America is] the planet’s sole remaining superpower.” The UN Obsession,” Time, May 9, 1994, p. 86.

Bible prophecy predicts that the United States of America and the papacy will join hands, and world events clearly show that the coalition is being formed. In Revelation 13:11 it says about America that it will speak as a dragon. A nation speaks through its legislative laws. The United States would enact religious laws, and try to force people to worship a certain way. America will make an image to the papacy. Church and state will be united to enforce religious laws that closely resemble the papal system. According to the prophecy, America will finally enforce the mark of the beast.

But what is the mark? Based on God’s Word it is the counterfeit Sabbath set up by the beast power or the Papacy. The keeping of Sunday instead of the Bible seventh day Sabbath is claimed as a mark of allegiance to the Catholic Church by her own priests and leaders. The United States will enforce the keeping of Sunday.

Right now, most of the states have Sunday Blue laws on their books. In some states these Sunday laws have created economic hardships on Sabbath keepers. Some large cities have been urged to boycott those who refuse to keep Sunday. The prophecy in Revelation 13:17 indicates that economic sanctions will be administered, “and that no man might buy or sell, save he that had the mark.”

This answer is also available in: हिन्दीThe apostle John wrote: “Now the great city was divided into three parts, and the cities of the nations fell. And great Babylon was… 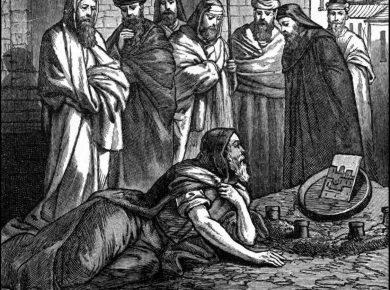 Table of Contents God’s original planEzekiel’s messageGod’s mercySummary This answer is also available in: हिन्दीEzekiel’s message reveals God’s purpose for His children through the sad experience of the Babylonian captivity.…