“But I want you to know that the head of every man is Christ, the head of woman is man, and the head of Christ is God” (1 Corinthians 11:3).

The word “head” in Greek is kephal. This word is used more than 70 times in the New Testament, and it is always translated as “head,” never as source or origin. When used metaphorically, the term “head” means someone who holds superior rank as leader, ruler, or authority figure. Paul in Ephesians uses a parallel of the term which makes it clear that the term cannot be read as source: “For the husband is head of the wife, as also Christ is head of the church; and He is the Savior of the body” ( Ephesians 5:23). It is obvious, the husband is not the “source” of the wife.

In this verse, there are three degrees of submission. The man is to acknowledge Christ as his Lord and Master; the woman, while recognizing the supremacy of Christ as Lord over all, is required to acknowledge that in domestic life she is placed under the guidance and protection of man; Christ, although equal with the Father is represented as recognizing God as head. Even among equals there may be a head. A committee of men of equal rank still selects its chairman.

In Colossians 1:18, Christ is called the head so that He may have preeminence: “He is the head of the body, the church, who is the beginning, the firstborn from the dead, that in all things He may have the preeminence.” In 1 Corinthians 11, Paul is saying that the same headship principle that applies in the home (Ephesians 5:22–33; 1 Peter 5:2, 3) also applies in the church.

The power and dignity of the husband depends on the position he holds toward Christ, his head, therefore the dependence of the wife on her husband is in the true sense dependence on Christ through the husband. The dependence of the wife on her husband was a divinely appointed plan for the good of both spouses. However, the dependence does not in any way imply the slightest degree of inferiority as the church does not experience dishonor by being dependent on Christ (Ephesians 1:18–23; 3:17–19; 4:13, 15, 16). This ideal plan is also given in the light of the fact that just as Christ gave Himself and died for the church, so a husband should be willing to do the same for the wife. 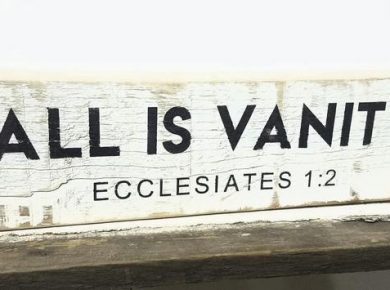 This answer is also available in: हिन्दी“Verily I say unto you, There be some standing here, which shall not taste of death, till they see the Son of man coming…
View Answer