The ordinance of the Lord’s Supper ( 1 Corinthians 11:20 ), is called also “the Lord’s table” (1 Corinthians 10:21), “communion,” “cup of blessing” (1 Corinthians 10:16), and “breaking of bread” (Acts 2:42). Jesus and His disciples observed this ordinance in the upper room at Jerusalem (Luke 22:13, 14). At the very time Jesus was giving instructions for the memorial ordinance of His death to be observed, the wicked religious leaders were plotting to kill him.

The Lord’s Supper, which succeeded the Passover memorial of deliverance from Egypt, was given, not as a sacrifice, but to remind the believer of what has been done for him by the one great sacrifice made by the Son of God (Hebrews 9:25–28; 10:3–12, 14). The Lord’s Supper is an ordinance of thanksgiving. The spiritual significance of the act of partaking of Lord’s Supper must be studied from background of man’s original state of perfection, his fall, and his redemption by God through Christ.

Preparation for the Lord’s Supper

Before partaking of the Lord’s Supper, the believer should carefully and prayerfully examine his experience as a follower of God. He should be sure that he is ready to receive God’s blessings that this ordinance grants to all who are in right standing with the Savior. But it is the promptings of the Holy Spirit that help in this process (John 16:8–15).

The apostle Paul instructed, “But let each one examine his own work, and then he will have rejoicing in himself alone, and not in another“ (Galatians 6:4). The Christian should scrutinize his own behavior and motives and weigh them by “the law of Christ” (v. 2).

The believer may question himself whether day by day he has an attitude of dying to sin and conversion to the Lord, whether he is winning in the struggle against his sins, and whether his relationship toward other men is godly. Words, thoughts, and actions should be tested, as well as habits of daily devotion; Thus, everything that has a bearing on progress toward the accomplishment of a character that mirrors the image of Jesus should be checked.

Paul wrote, “Examine yourselves as to whether you are in the faith. Test yourselves. Do you not know yourselves, that Jesus Christ is in you?—unless indeed you are disqualified” (2 Corinthians 13:5). Things that are of major importance include personal issues with the grace of Christ, full loyalty to all the revealed will of God, genuineness of purposes, and a selfless interest in, and actual service to mankind.

It is better for a believer to give his Christian walk a thorough review now than to delay that until it is too late—when the Almighty God brings him before the judgment seat. This testing process is important to the spiritual life in the process of sanctification. The Christian does well every day to evaluate his feelings and goals in the light of God’s revealed light and plan for him, and under the leadings of the Holy Spirit.

Whereas self-examination and the forsaking of everything that is against the mind of God is an exercise in which the Christian must engage every day (Luke 9:23; 1 Corinthians 15:31), the Lord’s Supper also represents a unique time for public announcement of new resolutions. The humility of the ordinance of foot washing prepares the believer for these announcements (John 13:4–17). 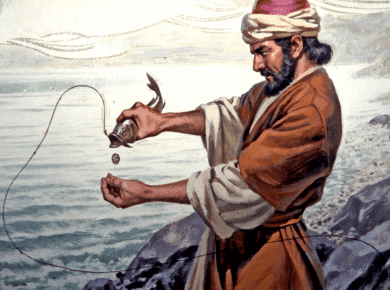 The temple tax was first mentioned in the book of Exodus when the Lord said, “When you take the census of the children of Israel for their number, then every…
View Answer

There are two types of “weak” members in the church. The first type is described in the following passage by Paul: “Accept the one whose faith is weak, without quarreling…
View Answer