It seems Dan was excluded because of that tribe’s reputation for idolatry as shown in Judges 18:30, 31. When we read those verses, we find that the tribes of Ephraim and Dan strayed from God and worshiped false gods. And the prophet Hosea in chapters 7:1-16 confirmed that Ephraim was not faithful to the Lord.

The tribe of Dan was last mentioned in the Old Testament in Amos 8:11-14 where God showed His displeasure for Israel’s idolatry following the false gods and idols of the tribe of Dan: “Behold, the days are coming,” says the Lord GOD, “That I will send a famine on the land, Not a famine of bread, Nor a thirst for water, But of hearing the words of the LORD. They shall wander from sea to sea, And from north to east; They shall run to and fro, seeking the word of the LORD, But shall not find it. “In that day the fair virgins and strong young men shall faint from thirst. Those who swear by the sin of Samaria, Who say, ‘As your god lives, O Dan!’ And, ‘As the way of Beersheba lives!’ They shall fall and never rise again.”

Revelation 7 says, “until we have sealed the servants of our God on their foreheads.” It is clear that the tribes of Ephraim and Dan were not among the faithful servants of God. For the Lord forbade idolatry when He gave the Ten Commandments (Exodus 20). The first commandment emphasized the fact that there is but one God, in protest against the worship of many gods and the second commandment placed emphasis upon His spiritual nature (John 4:24), in disapproval of idolatry. 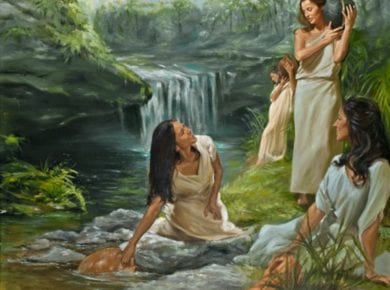 This page is also available in: हिन्दी (Hindi)“That the sons of God saw the daughters of men that they were fair; and they took them wives of all which they…
View Answer

This page is also available in: हिन्दी (Hindi)The Bible teaches that the saints will judge the wicked. Let’s read the following references: Jesus said to His disciples, “that you may…
View Answer