God will not allow the Sun to destroy the Earth in the future for God controls the destiny of this planet. All the heavenly bodies in the Universe obey the Creator (Is. 43:20), declare His glory (Ps. 19:1) and are subject to His commands.

David the prophets tells us that nature is subject to the will of God, “In His hand are the deep places of the earth; the heights of the hills are His also. The sea is His, for He made it; and His hands formed the dry land” (Psalm 95:4-5).

Unlike man who destroys the earth because of his disobedience to God (Revelation 11:18; Isaiah 24:4-6), God loves His faithful created beings and will protect them (Ps. 33:5). And He will also protect their habitation, that is planet earth (Ps. 1-4:24-25). Humans need only to trust in God’s love.

Jesus illustrated to His disciples that nature in submissive to Him when they once were caught in a deadly storm. Jesus “arose and rebuked the wind, and said to the sea, “Peace, be still!” And the wind ceased and there was a great calm. But He said to them, “Why are you so fearful? How is it that you have no faith? And they feared exceedingly, and said to one another, “Who can this be, that even the wind and the sea obey Him!” (Mark 4:39,40).

At the end of time, God will burn this sin polluted earth with those who chose to do wickedness and evil (Revelation 11:18) and will recreate a new earth and a new heaven “Then I saw “a new heaven and a new earth, for the first heaven and the first earth had passed away” (Revelation 21:1). All the former things will pass away and fear being one of the former things will also pass away. Then, the redeemed will live in perfect Joy and eternal peace. 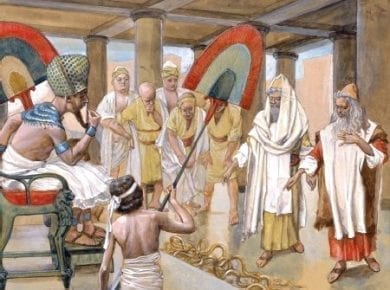 There is an incident at the beginning of Exodus where Moses performed a miracle and turned the rod of Aaron into a serpent. According to Exodus 7:15–18, Moses was directed…
View Answer