Some become disheartened when they see evil prevail in the earth. It may appear that God delays His justice, but at the appointed time, He will without a doubt reveal His deliverance. David wrote, “Do not fret because of evildoers, nor be envious of the workers of iniquity. For they shall soon be cut down like the grass, and wither as the green herb” (Psalm 37:1,2). Therefore, we should not worry over the apparent triumph of the wicked (Proverbs 24:19). The sinners will be judged (Psalm 25:8). The best cure for worry is trust in God and continual work in that which is of value to God and man.

Justice will be finally executed

Since Satan claimed that he had a better plan for the government of the universe and this earth and people believed him, God is giving him time to demonstrate his plans before the Universe. Eventually, the Lord will do justice, take vengeance, and destroy sin only after every soul in the universe is convinced that Satan’s government is unfair, hateful, ruthless and totally destructive. For “He has appointed a day on which He will judge the world in righteousness” (Acts 17:31).

God’s justice and love were clearly shown and displayed at the Cross (John 3:16). God’s justice poured the punishment of our sin on Jesus for our redemption. And, if God punished His innocent Son for us, we know, that He will certainly judge the evil doers at the appointed time “For if they do these things in a green tree, what shall be done in the dry?” (Luke 23:31; Romans 1:18).

God will be finally vindicated

The Bible says, “We are made a spectacle unto the world, and to angels, and to men” (1 Corinthians 4:9). The entire universe is watching as we play a part in the great controversy between good and evil. When the controversy ends, every soul will fully understand the principles of both kingdoms (Philippians 2:10) and will have made the decision to follow either Christ or Satan. Those who have chosen to ally with sin and Satan will be destroyed with him (Psalm 37:38), and God’s people will be taken to the eternal safety of their heavenly home (1 Thessalonians 4:17).

Also, at the day of Judgment, God will vindicate His people and take vengeance on the devil and judge all those that caused so much pain and suffering for His children. “Therefore thus saith the LORD; Behold, I will plead thy cause, and take vengeance for thee” (Jeremiah 51:36).  For every blow that strikes the saints strikes the Lord (Isaiah 63:9; Matthew 10:40; 25:34–46). He says: “he who touches you touches the apple of His eye” (Zechariah 2:8).

This answer is also available in: العربية हिन्दीJesus is God incarnate. For He repeatedly said, “I AM.” The phrase “I AM” is a title for God. When God called Moses…
View Answer 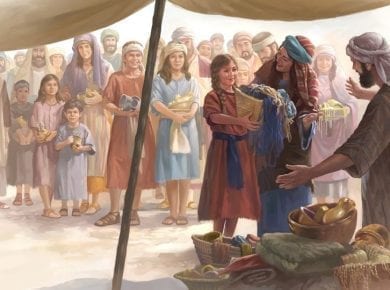 This answer is also available in: العربية हिन्दीGod called Moses at the burning Bush in the desert. And He foretold of what He will do to the Egyptians for oppressing…
View Answer