To answer this question, we simply compare Scripture with quotes from Catholic publications.  It is then up to the reader to decide for themselves what to believe. Please read our disclaimer below.

The Bible defines blasphemy as claiming to forgive sins. “And the scribes and the Pharisees began to reason, saying, “Who is this who speaks blasphemies? Who can forgive sins but God alone” (Luke 5:21), and as claiming to be God “The Jews answered Him, saying, “For a good work we do not stone You, but for blasphemy, and because You, being a Man, make Yourself God” (John 10:33).

Second-claims that the Pope is God on earth.

“The pope is not only the representative of Jesus Christ, but he is Jesus Christ, Himself, hidden under the veil of flesh.” Catholic National, July 1895.

“The pope is the supreme judge of the law of the land . . . He is the vicegerent of Christ, and is not only a priest forever, but also King of kings and Lord of lords” La Civilta Cattolica, March 18, 1871.

“The Pope is not only the representative of Jesus Christ, he is Jesus Christ himself, hidden under the veil of flesh.” — Catholic National July 1895.

“The pope is of so great dignity and so exalted that he is not a mere man (…) he is as it were God on earth, sole sovereign of the faithful of Christ, chief of kings, having plenitude of power.” Lucius Ferraris, «Prompta Bibliotheca», 1763, Volume VI, ‘Papa II’, pp.25-29

“you [priests] are called ‘another Christ.” Mother Teresa

Consider these statements above in contrast with what God says, “I will not give My glory to another” (Isaiah 48:11). 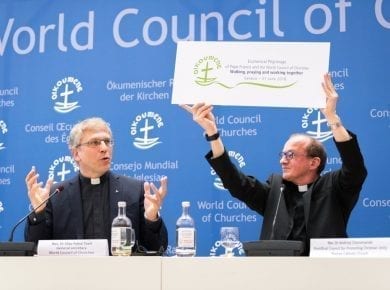 This page is also available in: العربية (Arabic) हिन्दी (Hindi)There is a trend among different world religions towards unity and “Pluralism.” This trend advocates that all religious are of equal…
View Answer

This page is also available in: العربية (Arabic) हिन्दी (Hindi)Question: What did Jesus mean when he said “gates of hell” will not to prevail against Peter? Answer: Figuratively speaking, the…
View Answer