The Roman Catholic Church publicly condemned the reading of the Bible in the language of the common people from the 1200s to the 1800s, and even persecuted those who had copies of the Scriptures in their possession. Note these historical statements:

At the Council of Toulouse (1229 A.D), papal church leaders ruled: “We prohibit laymen possessing copies of the Old and New Testament … We forbid them most severely to have the above books in the popular vernacular.” “‘The lords of the districts shall carefully seek out the heretics in dwellings, hovels, and forests, and even their underground retreats shall be entirely wiped out.” Pope Gregory IX, Council Tolosanum, 1229 A.D.

The Roman Catholic Council of Tarragona also ruled that: “No one may possess the books of the Old and New Testaments in the Romance language, and if anyone possesses them he must turn them over to the local bishop within eight days after the promulgation of this decree, so that they may be burned.” D. Lortsch, Histoire de la Bible en France, 1910, p. 14.

The Council of Trent (1545-1564) placed the Bible on its list of prohibited books, and forbade any person to read the Bible without a license from a Roman Catholic Church bishop or inquisitor. The Council added these words: “That if any one shall dare to read or keep in his possession that book, without such a license, he shall not receive absolution till he has given it up to his ordinary.”
“Since it is clear from experience that if the Sacred Books are permitted everywhere and without discrimination in the vernacular (in the common language of the people, D.R.) there will by reasons of the boldness of men arise therefrom more harm than good…” Canons and Decrees of the Council of Trent, p. 274.

J.A. Wylie, an authority on Romanism in the Reformation era, dedicated two chapters of his book The Papacy; Its History, Dogmas, Genius, and Prospects (London: Hamilton Adams, 1888) to Rome’s attitude toward the Bible. Wylie states: “The Latin Vulgate is the authorized standard in the Church of Rome, and that to the disparagement of the original Hebrew and Greek Scriptures. These are omitted in the decree [by the Council of Trent], and a translation is substituted. All Protestant translations, such as our authorized English version, Luther’s translation, &c. are prohibited” The Papacy; Its History, Dogmas, Genius, and Prospects, p. 181.

Pope Pius VII (1800-1823) denounced Bible Societies and expressed shock at the circulation of the Scriptures. This Pope declared, “It is evidence from experience, that the holy Scriptures, when circulated in the vulgar tongue, have, through the temerity of men, produced more harm than benefit.”
Pope Gregory XVI (1831-1846) railed: “against the publication, distribution, reading, and possession of books of the holy Scriptures translated into the vulgar tongue.”

Pope Leo XII called the Protestant Bible the “Gospel of the Devil” in an encyclical letter of 1824. In January 1850, he also condemned Bible Societies and admitted the fact that the distribution of Scripture has “long been condemned by the holy chair.”

Pope Leo XIII declared, “As it has been clearly shown by experience that, if the holy Bible in the vernacular is generally permitted without any distinction, more harm than utility is thereby caused…” Great Encyclical Letters of Leo XIII, pp. 412-413.

Thank God, Bible Societies (beginning in the 1800’s) won the war and have spread God’s Word around the world.

Table of Contents Political historyAttempt to unify a nationPersecution of othersJoining church and state This answer is also available in: हिन्दीThe term “Catholic” was first used in the early 2nd…
View Answer 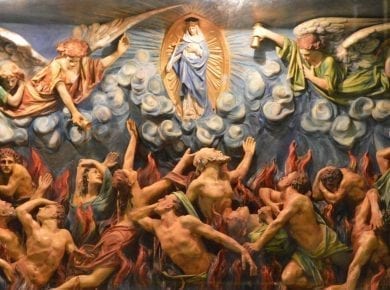 This answer is also available in: हिन्दीThe word “Purgatory” is not found in the Bible. It is a Catholic teaching. According to the Catholic Encyclopedia, Purgatory is “a place or…
View Answer