Home Miscellaneous Why didn’t the antediluvians believe in the flood when they saw how the animals entered the Ark?
The Bible tells us that “Of clean animals, of animals that are unclean, of birds, and of everything that creeps on the earth, two by two they went into the ark to Noah, male and female” (Genesis 7:8,9).
Just before the flood, two of every kind of animal entered the ark, obeying a mysterious instinct. Animals of every description, the vicious as well as the most gentle, were seen coming from mountain and forest and gently making their way toward the ark. The birds were gathering from all directions in impeccable order to enter the ark. Directed by holy angels, they “went in two and two unto Noah into the ark,” and the clean animals by sevens. Nothing less than heavenly power could have achieved such a timely and orderly entrance into the giant vessel.
What a clear warning this must have been for the ungodly who observed it! Here were tamed and wild beasts, creeping and flying animals, all creating their way into the ark, seemingly of their own wish.
What a difference—dumb animals obedient to their Maker while intelligent beings refusing to regard His warning call of mercy! If anything could do so, this should have made an impression upon the sinners.
But men had become so hard-edged by their tenacious rejection of light that even this scene created but a temporary impression. As the lost race beheld the sun shining in its glory, and the earth dressed in almost Eden beauty, they expelled their rising fears by overexcited senses, and by their deeds of violence they appeared to invite upon themselves wrath of God.
For this reason, the Bible warns the believers to listen and obey the voice of the Holy Spirit without delay that their hearts don’t get hardened by sin:  “TODAY IF YOU HEAR HIS VOICE, DO NOT HARDEN YOUR HEARTS AS WHEN THEY PROVOKED ME, AS IN THE DAY OF TRIAL IN THE WILDERNESS, WHERE YOUR FATHERS TRIED Me BY TESTING Me, AND SAW MY WORKS FOR FORTY YEARS” (Hebrews 3:7-9). 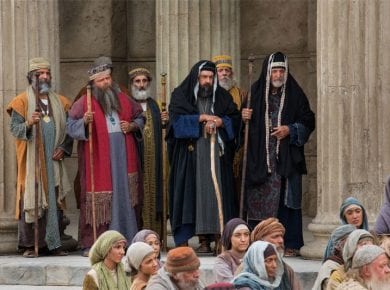 The Jewish/Roman historian Flavius Josephus mentioned the three sects that the Jews were divided into in the year 145 B.C. These were the Pharisees, Sadducees and the Essence. The Pharisees…
View Post

“Now John himself was clothed in camel’s hair, with a leather belt around his waist; and his food was locusts and wild honey” (Matthew 3:4). John the Baptist After a…
View Post