God did not destroy the devil when he sinned because God created angels with the freedom of choice. By giving intelligent beings total freedom,  the Lord knew He would face danger. But He knew it would be better to create nothing at all than to create creatures without free choice (Joshua 24:15).

God understood that only creatures with freedom of choice could have a loving relationship with Him because true love doesn’t use force. And because the very nature of free choice is to be free from force, any decisions made are the individual’s own responsibility.

The Lord took a risk in creating free-choice moral beings. There is no reason for Lucifer to have rebelled against God, but Lucifer chose a different path in opposition to God. If God were to destroy immediately all those that opposed Him, freedom of choice would not exist and God’s beings may harbor doubts and worship God out of fear not out of love (1 John 4:18).

Lucifer accused God of being unjust and that he himself has a better government.  So, God is giving him the chance to prove his claims and demonstrate his government (1 John 3:8). The Lord will finally destroy sin only after every being in the universe has seen that the devil’s government is deadly. And when the controversy ends, every soul will fully understand the principles of God’s kingdom and the devil’s kingdom. Everyone in the universe will see the difference between the love of God and the cruel hate of the devil (Philippians 2:10; Isaiah 45:23).

Freedom of choice is so important to God, it is the principle of His government and He took upon Himself the responsibility of saving humanity by sacrificing His innocent Son (John 3:16) to give us a second chance at making the right choice.  “Greater love has no one than this, than to lay down one’s life for his friends” (John 15:13). In summary, the suffering we experience as a result of sin is nothing compared to the suffering that God experiences when people don’t make the right choice.

This page is also available in: हिन्दी (Hindi)While sincerity is very important in a relationship with God, the Lord requires more than just sincerity; He asks for our obedience. God…
View Answer 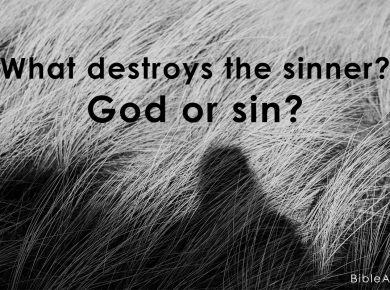