The Bible records, “He (Jesus) saw the city and wept over it” (Luke 19:41).  Jesus did weep for He could see the terrible fate of Jerusalem at the hands of Roman armies, less than 40 years later. It was the sight of Jerusalem that pierced the heart of Jesus. He saw the destruction of Jerusalem that had scorned His love and was about to take His life. He saw what she was in her guilt of rejecting her Redeemer, and what she might have been had she accepted Him who alone could heal her sins. He had come to save her; how could He give her up? In His eyes one soul is of such value that, in comparison with it, worlds vanish into insignificance; but here was an entire nation to be destroyed.

The tears of Jesus were not in anticipation of His own suffering even though Gethsemane and Calvary awaited Him. There, the horror of a great darkness would engulf Him when the great sacrifice will be made for the sins of the world. Yet, it was not because of these reminders of His cruel death that the Redeemer wept in anguish of spirit. His was not a selfish sorrow.

Israel had been a favored people; it was “the joy of the whole earth” (Ps. 48:2). It was the focus of Christ’s tender care for more than a thousand years, such as a father bears his only child. In that temple, the blood of beasts was shed, typical of the blood of Christ.

Jesus said in agony, “If you had known, even you, especially in this your day, the things that make for your peace!” (Luke 19:42). Had Jerusalem accepted God’s Son, she might have stood forth in the pride of prosperity, the queen of kingdoms, free in her God-given power and strength. She would have been the world’s glory.

But Jesus realizes what Jerusalem now is under the Roman bondage, doomed for judgment. And He adds: “For days will come upon you when your enemies will build an embankment around you, surround you and close you in on every side,  and level you, and your children within you, to the ground; and they will not leave in you one stone upon another, because you did not know the time of your visitation” (Luke 19:43-44).

All through the ages people have wondered about the date of Jesus’ return to earth. Jesus answers,“for ye know neither the day nor the hour wherein the Son of man…
View Answer 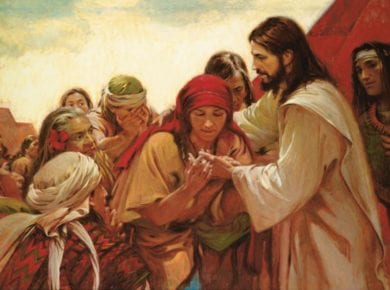