The symbol of the Vine

In Bible symbolism, Israel had been compared to a vine (Isaiah 5:1–7). The prophet wrote, “In that day sing to her, a vineyard of red wine! I, the LORD, keep it, I water it every moment; lest any hurt it, I keep it night and day” (Isaiah 27:2, 3). And Jeremiah also wrote, “Yet I had planted you a noble vine, a seed of highest quality. How then have you turned before Me into the degenerate plant of an alien vine?”  (Jeremiah 2:21; 12:10).

Images of the leaves of the vine or of clusters of grapes were often shown on ancient coins and architecture. We learn from ancient literature that a gold vine decorated the entry to Herod’s Temple (Mishnah Middoth 3. 8, Soncino ed. of the Talmud, p. 15).

And the Jews relied upon their linking with the vine of Israel for their redemption. For we read in the Old Testament that God had plucked “a vine out of Egypt” (Psalms 80:8) and had established it in the land of Canaan. And in the New Testament, the Father took His only begotten Son, and planted Him in the land of Israel to redeem mankind through His sacrificial death (John 3:16). But Israel had proved disloyal to its spiritual privileges and was unfaithful to its Creator and provider.

In John 15:1-8, Christ spoke of Himself as the true vine: “I am the vine, you are the branches: He that abides in me, and I in him, the same brings forth much fruit: for without me you can do nothing” (John 15:5). He explained that believers represent the branches of the vine and that only through daily connection with Himself they could be saved and produce the fruits of righteousness (John 13:35).

It is impossible for humans in their own power to overcome sin and bring forth fruits unto holiness. As the branches are dependent upon their unity with the vine for life and fruitfulness, so the believers must rely upon their connection with Christ through daily study of the Word and prayer. When Christians abide in Christ, He lives in them and they become partakers of His divine nature (2 Peter 1:4). Their thoughts become like His (1 John 5:14) and His image is reflected in their lives. This reflection of the Christian graces is the evidence of their discipleship.

The branch and the vine

The misconception that, “once saved always saved,” is denied by this condition. The Bible teaches that it is possible for those who have been in Christ to exercise their free will and cut their connection with God and be lost. Paul wrote about this condition; “For it is impossible for those who were once enlightened, and have tasted the heavenly gift, and have become partakers of the Holy Spirit,  and have tasted the good word of God and the powers of the age to come, if they fall away, to renew them again to repentance, since they crucify again for themselves the Son of God, and put Him to an open shame” (Hebrews 6:4–6).

The Christian represented by the detached branch may have a form of godliness, but the living power of God in his life is missing (2 Timothy 3:5). So, when temptation attacks him, the superficiality of his profession is exposed. Thus, salvation is conditional upon a person’s daily connection with Christ.

Also, to abide in Christ means to abide in the shelter of His love. It is reassuring to realize that Christ’s love for His children is as enduring as the Father’s love for Him. For, “the Father himself loves you” (John 16:27) with the equal love with which He loves His Son. What a blessed promise!

This page is also available in: العربية (Arabic) हिन्दी (Hindi)Jesus is ministering in the heavenly sanctuary for the saints “We have such an high priest, who is set on the…
View Answer 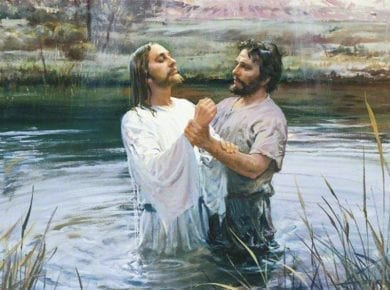 This page is also available in: العربية (Arabic) हिन्दी (Hindi)Jesus performed His supernatural works of raising the dead for specific reasons according to His Father’s infinite plan. In divine wisdom,…
View Answer