Simon Peter, also known as Cephas (John 1:42), was one of the twelve disciples of Jesus Christ. He was from Bethsaida (John 1:44) and lived in Capernaum (Mark 1:29), these cities were on the Sea of Galilee. Simon, James, and John worked together as fishermen (Luke 5:10).Unlike the other disciples, Simon was married (1 Corinthians 9:5).

Jesus calls Simon to be His disciple

Simon was the brother of Andrew, who followed Jesus after hearing John the Baptist declare that Jesus was the Lamb of God (John 1:35-36). Andrew brought Simon to Jesus. And when Jesus met Simon, He gave him a new name: Cephas (Aramaic) or Peter (Greek), which means “rock” (John 1:40-42). Jesus asked Peter to follow Him (Luke 5:1-7) and Peter right away left everything and followed Him (v. 11).

Simon was one of Jesus’ three closest disciples along with James and John. Only those three were present when Jesus raised the daughter of Jairus (Mark 5:37) and at the transfiguration (Matthew 17:1). Just before the crucifixion, Jesus asked Peter and John to prepare the final Passover meal (Luke 22:8).

Peter was fervent, bold, courageous, and sometimes even impulsive. Jesus reaffirmed that Peter’s faith in Him as Lord was the rock on which the church will be built on (Matthew 16:18-19). For salvation is obtained only through faith in the atoning blood of Jesus (Acts 16:31; Romans 10:9).

Simon had a weakness of being self-confident which led him to deny Jesus 3 times just before the crucifixion. But Peter repented fully of his sin and Jesus forgave him. After the resurrection, Jesus sent him a message of good news and acceptance (Mark 16:7). And, later at the lake, Jesus publicly re-commissioned him as an apostle of the gospel (John 21:6, 15-17).

Peter ministry in the early church

On the day of Pentecost, Peter was the main speaker to the crowds in Jerusalem (Acts 2:14). As a result, the church added about 3,000 new believers (verse 41). He, later on, preached boldly before the Sanhedrin (Acts 4) and continued in His God given mission in spite of the threats, imprisonment and beatings. Thus, he became a “pillar” of the early church (Galatians 2:9).

Peter, at first, resisted taking the gospel to the gentiles (Cornelius) but the Holy Spirit showed him his error and he then understood that “God does not show favoritism” (Acts 10:34). After that, Peter defended the Gentiles’ position as believers and taught that they did not need to conform to Jewish law (Acts 15:7-11).

The apostle freely fellowship with the Gentile believers. However, when some legalistic Jews arrived in Antioch, he tried to please them by withdrawing from the Gentile Christians. At this point, the Apostle Paul saw this as hypocrisy and called it by name (Galatians 2:11-14).

Peter wrote two epistles, 1 and 2 Peter, between A.D. 60 and 68. Jesus predicted that the apostle would die a martyr’s death (John 21:18-19). This prophecy was fulfilled most probably during Nero’s reign. 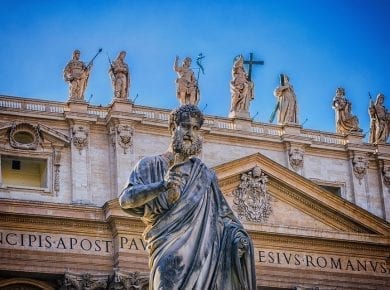 This answer is also available in: हिन्दीThe doctrine of apostolic succession is the belief that the twelve apostles passed on their authority to successors, who then passed the apostolic authority on…
View Answer