King Nebuchadnezzar took King Jehoiachin, his mother, his wives, his officers captives to his land. The prophet Ezekiel was also among the captives (Eze. 1:1–3). And he also took away all the treasures of the house of the LORD and the treasures of the king’s house. And he cut in pieces all the articles of gold which Solomon king of Israel had made in the temple of the LORD. Also, he carried into captivity ten thousand captives. The craftsmen and smiths with the 7,000 “men of might” would make 8,000. This leaves 2,000, that belonged to the class of civil and religious officials. Those that remained were the poor of the land (2 Kings 24:10-16).

“Now it came to pass in the thirty-seventh year of the captivity of Jehoiachin king of Judah, in the twelfth month, on the twenty-seventh day of the month, that Evil-Merodach king of Babylon, in the year that he began to reign, released Jehoiachin king of Judah from prison. He spoke kindly to him, and gave him a more prominent seat than those of the kings who were with him in Babylon. So Jehoiachin changed from his prison garments, and he ate bread regularly before the king all the days of his life. And as for his provisions, there was a regular ration given him by the king, a portion for each day, all the days of his life” (2 Kings 25:27–30).

The captivity of Judah was a fulfillment of the prophecies of Isaiah (2 Kings 20:18; Isa. 39:7), and Jeremiah (Jer. 22:24–30). The Lord warned His people that if they persist in their apostasy of worshiping idols and doing injustice, he will withdraw His protective hands from them. Sadly, the Israelites didn’t heed the Lord’s warnings. Consequently, He permitted their enemies to overcome them.

Archeology throws light on this captivity. Robert Koldewey excavated tablets from Babylon during 1899–1917. These tablets were stored in a barrel-vaulted underground building consisting of rows of rooms near the Ishtar Gate. The tablets date from the 6th century BC.

These tablets from the royal archives of Nebuchadnezzar king of Babylon were discovered in the ruins of Babylon that contain food rations given to prisoners and workers who lived in and around the city. Interestingly, the tablets record the rations given for a royal captive named Jeconiah, king of Judah with his five royal sons.

This page is also available in: हिन्दी (Hindi)In the New Testament, there are several men by the name of Judas. These are: 1-Judas Iscariot – He is one of the…
View Answer 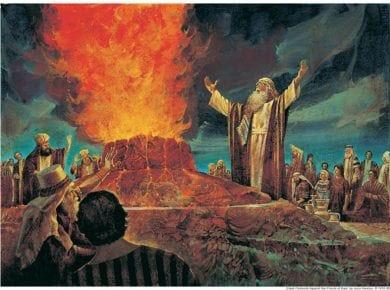 This page is also available in: हिन्दी (Hindi)The prophecy of Daniel teaches that the Messiah would end the sacrificial system. Daniel prophesied that the Messiah “shall confirm a covenant with…
View Answer