The word Elisabeth comes from the Hebrew word ‘Elisheba,’ meaning “my God has sworn,” or “my God is abundance.” In the OT, it was the name Aaron’s wife (Ex. 6:23). And in the New Testament, Elisabeth was the wife of Zachariah the priest (Luke 1:5). She was  also a cousin of Mary, the mother of Jesus. According to Luke 1:6, Zacharias and Elisabeth were a godly couple that strictly observed the ritual law. They worshiped God “in spirit and in truth” (John 4:24).

But Elizabeth was barren,“advanced in years” (Luke 1:7), and past the child-bearing age (Luke 1:18). Once when it was Zacharias’ turn to serve in the temple, the angel Gabriel appeared to him, saying that he and Elizabeth will have a son who will “great before the Lord” and bring joy and gladness to them, as well as to many other people (Luke 1:14–15).

Zacharias doubted the word of the angel for his wife was aged, so Gabriel told him that he would be unable to speak until the prophecy came to pass (Luke 1:19–20, 26–27). When the Lord’s words came to pass and Elizabeth got pregnant, she praised the Lord saying, “The Lord has done this for me… In these days he has shown his favor and taken away my disgrace among the people” (Luke 1:25).

Mary the cousin of Elizabeth also conceived after six months and was told by the angel Gabriel that Elizabeth was also pregnant. So, Mary went to visit her (Luke 1:36–37).

When Mary arrived at Elizabeth’s home and Elizabeth heard Mary’s greeting, “the baby leaped in her womb, and Elizabeth was filled with the Holy Spirit. In a loud voice she exclaimed: ‘Blessed are you among women, and blessed is the child you will bear! But why am I so favored, that the mother of my Lord should come to me? As soon as the sound of your greeting reached my ears, the baby in my womb leaped for joy. Blessed is she who has believed that the Lord would fulfill his promises to her!’” (Luke 1:41–45).

Eight days after Elizabeth gave birth, her relatives came for her baby’s circumcision and she announced that her baby will be named John. The people were surprised since none of them had ever been called John. But Zacharias wrote down on a tablet the same name John. So they all marveled. Then, the Lord opened up Zacharias’ tongue and he was able to speak again (Luke 1:57–64).

Elizabeth’s child became known as John the Baptist a prophet of the Most High. He prepared the way “before the Lord, in the spirit and power of Elijah” (Luke 1:17) thus, fulfilling the prophecy of Malachi (Malachi 3:1; Luke 1:76; John 3:1–6). 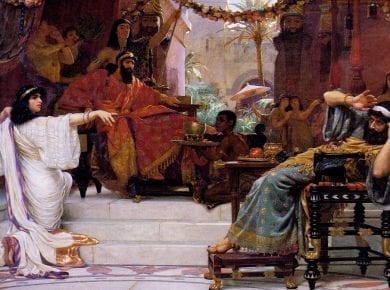 The Old Testament books were the only scriptures that Christ and His disciples had. Jesus referring to the Old Testament said, “Think not that I am come to destroy the…
View Answer