Marcus Antonius Felix was the Roman procurator of Judea Province (52 – 60 AD) that ruled after Ventidius Cumanus. He was the younger brother of the Greek freedman Marcus Antonius Pallas. This man served as a secretary of the treasury during the reign of the Emperor Claudius. Felix became the procurator by the appeal of his brother. According to Tacitus, Pallas and Felix descended from the Greek Kings of Arcadia.

Suetonius (Lives of the Caesars v. 28) wrote that Felix was the husband of three wives. The second wife was Drusilla, daughter of Herod Agrippa I, an offspring of both Herod the Great and the Maccabees (The Herods; Acts 24:24). Felix and the Judean Drusilla, had a son named Marcus Antonius Agrippa. This son died along with his mother and many of the people of Pompeii and Herculaneum in the eruption of Mount Vesuvius on 24 August 79.

Felix was a cruel and reckless ruler. Tacitus (Annals xii. 54; Loeb ed., vol. 3, p. 393) said of Felix that he “considered that with such influences behind him all malefactions would be venial.” He was backed by his brother who was preferred by the emperor Claudius. Despite revolt by the Jews against Rome, Felix was able to maintain some order in Judea (Acts 24:1). This he did notwithstanding his poor administration (Tacitus Annals xii. 54).

The book of Acts records that the apostle Paul was arrested in Jerusalem. The Jews accused him of desecrating their temple (Acts 21). And because there was a plot against his life, the local Roman chiliarch Claudius Lysias transported him to Caesarea, to stand trial before Felix (Acts 23:23–24), writing to him the following letter:

To the most excellent governor Felix:

This man was seized by the Jews and was about to be killed by them. Coming with the troops I rescued him, having learned that he was a Roman. And when I wanted to know the reason they accused him, I brought him before their council. I found out that he was accused concerning questions of their law, but had nothing charged against him deserving of death or chains. And when it was told me that the Jews lay in wait for the man, I sent him immediately to you, and also commanded his accusers to state before you the charges against him.

But Felix delayed the hearing until Paul’s accusers could be present (Acts 23:33–35). Five days later, Ananias the high priest, Jewish elders, and a lawyer called Tertullus arrived before Felix.

At the hearing, Tertullus and the Jewish leaders charged Paul of disrupting the peace and desecrating the temple (Acts 24:5–6). But Paul showed that he had not been found guilty of any charge before the Sanhedrin in Jerusalem and that the people that accused him were not present (Acts 24:17–21). Felix knew about Jesus’ followers called the Way. And when he learned that Paul’s case dealt with his religion, he delayed the hearing until the Roman commander who had arrested Paul could be present (Acts 24:22).

Felix fails to yield to God

The Roman procurator found Paul’s message appealing and he called him to hear more of his teaching. He and Drusilla his wife both “listened to [Paul] as he spoke about faith in Christ Jesus” (Acts 24:24). The procurator called Paul again and again (v. 26). But when the Holy Spirit convicted Felix, he ordered Paul to stop preaching and wait for a more “convenient” time (Acts 24:25).He  never came to the point of making a decision for God and thus lost his chance to be saved. The Bible says, “To day if ye will hear his voice, harden not your hearts” (Hebrews 3:15).

Felix kept Paul in jail for two years, hoping to receive a bribe from him (Acts 24:26) and also to please the Jews (Acts 24:27). On returning to Rome, he was accused of using a disagreement between the Jews and Syrians of Caesarea as an excuse to kill and plunder the people. But through the mediation of his brother, the freedman Pallas, who had great influence with the Emperor Nero, he was not punished. Porcius Festus succeeded Felix as procurator of Judea. Some historians believe that Felix may have had tuberculosis that finally led to his death.

Gethsemane is a name of a garden in Palestine that was often visited by Jesus. The exact location of the garden of Gethsemane is not known. This spot was situated…
View Post 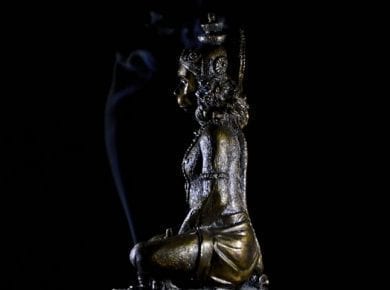 “Thou shalt have no other gods before me. Thou shalt not make unto thee any graven image, or any likeness of any thing that is in heaven above, or that…
View Post