Contemporary Christian “Zionists” have written books on the rebuilding of the temple in Israel including Thomas Ice, Randall Price, Grant Jeffrey, Hal Lindsey, Tim LaHaye, Dave Hunt, and John Hagee.
But what does the Bible say about rebuilding of the temple?
Most of the speculation for a rebuilt temple is based on one reference in the New Testament dealing with the Antichrist power “Let no man deceive you by any means: for that day shall not come, except there come a falling away first, and that man of sin be revealed, the son of perdition; Who opposeth and exalteth himself above all that is called God, or that is worshipped; so that he as God sitteth in the temple of God, shewing himself that he is God” (2 Thessalonians 2:3,4).
Since the Romans destroyed the last Jewish house of God in AD 70, many naturally assume that in order for the Antichrist to sit there, it will have to be rebuilt. But let’s allow the Scriptures to clarify:
The Lord told David, “Solomon thy son, he shall build my house and my courts” (1 Chronicles 28:6). Solomon, the son of David did build a physical prayer house, but the New Testament says that Jesus was the true “Son of David,” who was to build His house and kingdom that will last forever.
Jesus clearly taught that He had come to transfer the attention from a physical building of worship to his body, the church. “Jesus answered and said unto them, Destroy this temple, and in three days I will raise it up. Then said the Jews, Forty and six years was this temple in building, and wilt thou rear it up in three days? But he spake of the temple of his body” (John 2:19-21). Jesus was the real temple of the Jews.
But when the Jews rejected Him and sought to kill Him, He said to them “Behold, your house is left unto you desolate” (Matthew 23:38). And He prophesied of the destruction of His house (Matthew 24:1, 2).
And even as Jesus hung on the cross, His mockers reminded Him of His teachings. “Thou that destroyest the temple, and buildest it in three days, save thyself. If thou be the Son of God, come down from the cross” (Matthew 27:40). But Jesus was not speaking of rebuilding the physical house of prayer. He meant to build a spiritual one.
When Jesus was crucified, “the veil of the temple was rent in twain from the top to the bottom”  (Matthew 27:51). After the veil ripped from top to bottom, the disciples understood that the believers became the temple of God on earth  (1 Corinthians 3:17, 16).
Paul confirmed that saying, “Now therefore ye are no more strangers and foreigners, but fellow citizens with the saints, and of the household of God; And are built upon the foundation of the apostles and prophets, Jesus Christ himself being the chief corner stone; In whom all the building fitly framed together groweth unto an holy temple in the Lord: In whom ye also are builded together for an habitation of God through the Spirit” (Ephesians 2:19-22). “Ye also, as lively stones, are built up a spiritual house, an holy priesthood, to offer up spiritual sacrifices, acceptable to God by Jesus Christ” (1 Peter 2:5).
Even after God provides all this clear biblical evidence that His temple today is a spiritual one which is the church, many Christians are waiting for the Jews to rebuild a physical temple on the site where the mosque of Omar (Dome of the Rock) now sits—also known as the Temple Mount. Yet, there is no prophecy in the Bible that says the temple would be rebuilt again after the Romans destroyed it.
So, what does the verse in 2 Thessalonians 2:4 mean? It simply means that the Antichrist power would seat itself over the church of God claiming the worship that belongs only to Jesus Christ. Historically, Protestant scholars have consistently applied this verse to the papal power. 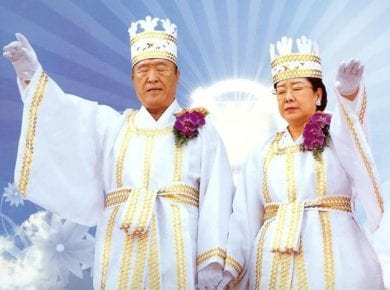 This page is also available in: हिन्दी (Hindi)According to Reverend Moon (1920-2012), he was the Messiah of the Second Coming since he believed that Jesus will not be coming again…
View Answer

This page is also available in: हिन्दी (Hindi)The 144,000 in the Bible The 144,000 is mentioned in the following references in the Bible: “And I heard the number of those…
View Answer