Jesus’ first sermon in a synagogue setting probably took place in Nazareth (Luke 4:16:22). This was Jesus’ first visit to Nazareth since He had left the carpenter shop in the autumn of 27 A.D. to take up His public ministry. And it probably occurred at the late spring of A.D. 29, half way through His public ministry. A year later, probably in the early spring of A.D. 30, Jesus paid His last visit to that city.

Jesus came to Nazareth, where He had been brought up. And as His custom was, He went into the synagogue on the Sabbath day, and stood up to read. There, He was handed the book of the prophet Isaiah. And when He had opened the book, He found the place where it was written: “The Spirit of the LORD is upon Me, because He has anointed Me to preach the gospel to the poor; He has sent Me [i]to heal the brokenhearted, to proclaim liberty to the captives and recovery of sight to the blind, to set at liberty those who are [j]oppressed; to proclaim the acceptable year of the LORD” (Luke 4: 18,19).

Then, Jesus closed the book, and gave it back to the attendant and sat down. And the eyes of all who were in the synagogue were fixed on Him. “And He began to say to them, “Today this Scripture is fulfilled in your hearing.”  So all bore witness to Him, and marveled at the gracious words which proceeded out of His mouth” (vs. 20-22).

The people of Nazareth had heard reports of the powerful preaching of Jesus during the time of His Judean ministry (Matt. 4:12). But now they got the opportunity to hear for themselves the words of God coming out of His lips. His truthful message captivated the people. The years of knowing Jesus had led them to look upon Him as a common man and a carpenter’s son but now He exhibited divine qualities. Yet, they refused to believe that He who was so humble could be the Promised One.

So all those in the synagogue, when they heard Him declaring that He was the anointed One, were filled with anger,  and rose up and took Him out of the city; and they led Him to the brow of the hill on which their city was built, that they might throw Him down over the cliff (vs. 28,29). But Jesus passed through the crowds unharmed and left them. 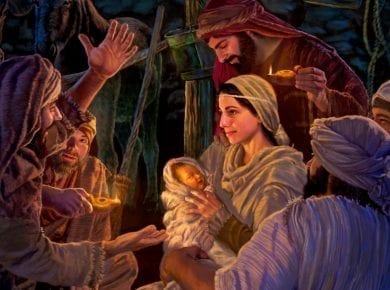 There is no reference in the scriptures to the exact year in which Jesus was born. But if we look at the historical details, we will be able to know…
View Answer