Home Prophecy What lesson did Peter learn from the vision of the beasts?

The lesson of Peter’s vision

It is clear from Acts chapters 10 and 11 that God taught Peter in the vision of wild beast a lesson that concerned men not beasts. Peter learned that no man is unclean. For humanity had been bought by the sacrifice of Christ on the cross. And People should not consider even the worst heathen as unclean. The Lord accepts all people through His Son. “For God so loved the world that He gave His only begotten Son, that whoever believes in Him should not perish but have everlasting life” (John 3:16).

It is sin alone that separates people from God. “But your iniquities have separated you from your God; and your sins have hidden His face from you, so that He will not hear” (Isaiah 59:2). God regards impurity as a moral not a racial defect. Inasmuch as every man is possibly the subject of such a godly change, he must be accepted as one in whom the image of God may yet be restored (1 Peter 2:17).

God gave Peter the vision of the unclean beasts because the Jews had prejudices against the gentiles. This Jewish exclusiveness was identified by the classical writers. Juvenal said: “Having been wont to flout the laws of Rome, they [the Jews] learn and practice and revere the Jewish law, and all that Moses handed down in his secret tome, forbidding to point out the way to any not worshipping the same rites, and conducting none but the circumcised to the desired fountain” (Satires xiv. 100–104; Loeb ed., p. 273). Also, the strict Jew was restricted from entering a Gentile’s house by a prohibition in the Mishnah: “The dwelling-places of heathens are unclean” (Oholoth 18. 7, Soncino ed. of the Talmud, p. 226).

Breaking the wall of partisan

Had Christianity remained merely a sect of Judaism it could never have spread to all the world. Therefore, the first main job of the church was to bring down the wall of separation that ruled it. In the conversion of Cornelius, the Holy Spirit led the early church to take its first essential step in that path. Pride of class based on mere variances of culture revealing itself in deeds and words of disrespect is not acceptable. All people should be reached with the truth of the Bible (1 Timothy 2:4). Peter needed to make the distinction between who he thought were unclean.

The apostle had to learn that Jewish Christians had to accept those of other races into equal fellowship with themselves. And the apostle Paul, the champ of Gentile Christianity, emphasized this belief in Romans 2:9–11 and declared, that neither race, nor sex, nor social status have any bearing in God’s sight (Galatians 3:28; Colossians 3:10, 11).

This page is also available in: العربية (Arabic) हिन्दी (Hindi)The Bible shows that God’s promises to Israel in the Old Testament were conditional on their obedience to Him. If they…
View Post 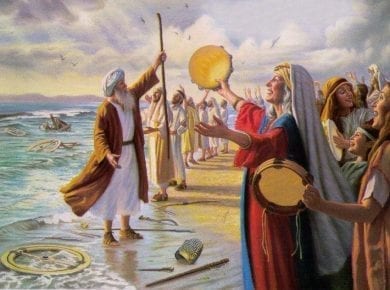 This page is also available in: العربية (Arabic) हिन्दी (Hindi)Miriam was the first woman prophet in the Bible. She was the daughter of Amram and Yocheved, and the sister of…
View Post