The Song of Moses is a poem that is recorded in Deuteronomy 32:1–43 in the Old Testament. Most Bible scholars believe it was written between the tenth and eighth centuries BCE. The Bible tells us that Moses delivered it just before his death on Mount Nebo (v. 48).

God met with Moses and Joshua (Deuteronomy 31:16-18) who was going to lead the Israelites after Moses’ death. And the Lord told them that after Moses’ departure, the people of Israel would go back on the covenant that God had made with them and worship the heathen gods of the Canaanite nations.

And the Lord told Moses to write down the words of a song to teach the people God’s ways, so that it may be a “witness for Me against the children of Israel” (Deuteronomy 31:19). Moses did as he was told (Deut. 31:22). And then he “spoke in the hearing of all the assembly of Israel the words of this song until they were ended” (Deuteronomy 31:30).

The song was written with a special arrangement of two parallel columns. And it started with an exhortation (v. 1–3) in which heaven and earth were called to hear what Moses had to say. In verses 4–6, the theme is the faithfulness of God toward His unfaithful people. Verses 7–14 show God’s care which led Israel in safety through the wilderness and gave it a rich and good land.

Verses 15–18 portray Israel’s unfaithfulness and idolatry. And their apostasy moved the Lord to warn them (verses 19–27) that He will bring national ruin and destruction. Verses 28–43 describe how the Lord has determined to call the Israelites through their deep distress, that they may recover spiritually and have victory over their enemies.

Some highlights of the poem

This is a portion that describes God’s tender love for his people:

“He found him in a desert land
And in the wasteland, a howling wilderness;
He encircled him, He instructed him,
He kept him as the apple of His eye.
As an eagle stirs up its nest,
Hovers over its young,
Spreading out its wings, taking them up,
Carrying them on its wings,
So the LORD alone led him,
And there was no foreign god with him” (V.10-12).

When Moses finished speaking the words of his poem to Israel, he ended with the exhortation,  “set your hearts on all the words which I testify among you today” (v. 45-47). Then, Moses viewed the Promised Land with his eyes. And he died peacefully. But God rewarded His faithful servant by raising him from death (Jude 9) and took him to heaven. Centuries later, Moses continued his faithful ministry and descended with Elijah to speak to Christ on the mount of transfiguration (Mark 9:2–4).

In the Old Testament, the first tithe was strictly for the support of the priests and Levites (Lev. 27:30-34; Num. 18:19-28). The second tithe provided either for the sacred feasts…
View Answer 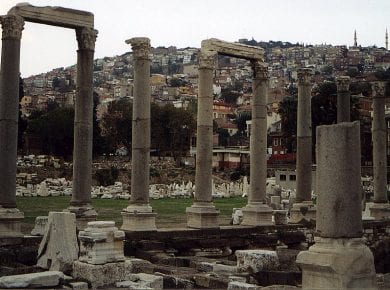 Smyrna or myrrh is an ancient city of Ionia on the western coast of Asia Minor, about 40 miles to the north of Ephesus. It is now the chief city…
View Answer