The apostle John wrote: “Now the great city was divided into three parts, and the cities of the nations fell. And great Babylon was remembered before God, to give her the cup of the wine of the fierceness of His wrath. Then every island fled away, and the mountains were not found. And great hail from heaven fell upon men, each hailstone about the weight of a talent. Men blasphemed God because of the plague of the hail, since that plague was exceedingly great” (Revelation 16:19-21).

What is the great city?

The world will attack mystical Babylon

At that time, there will be a dreadful awakening among the nations as God’s voice is heard with the command to deliver His children from their enemies. Now, the former components of the universal religio-political combine of ch. 16: 13, 14 begin to fight among themselves, and the “ten kings” of ch. 17:12–16 take revenge upon mystical Babylon (Rev. 17:17). And the hosts of earth will turn with anger upon their leaders who deceived them and upon one another with the same weapons that they intended to destroy God’s people. The result will be great conflict and violence everywhere (Rev. 14:20).

The second coming of Christ will destroy the wicked 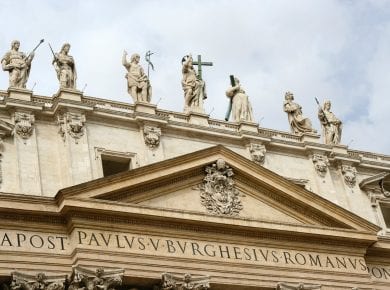 Table of Contents The Beast’s Deadly WoundThe Healing of the WoundThe Beast TodayDisclaimer: “And I saw one of his heads as if it had been mortally wounded, and his deadly…
View Answer

Table of Contents 1-Who is the beast?2-What is God’s mark?3-What is the mark of the beast?4- Will I Be Lost If I Go to Church on Sunday?5- Is the Mark…
View Answer