There were signs and wonders that took place at the crucifixion of Jesus Christ. Here they are:

Jesus had already been suffering on the cross for three hours when darkness took place at noon time. It was not a natural phenomenon. And it was not an eclipse of the sun because this was the time of the full moon of the Passover week. It was a three-hour supernatural darkness that covered the whole land from noon until 3 p.m. This was the period when Jesus suffered extreme anguish of spirit, untold physical pain, and deep separation from God as He carried the sins of the world.  At the end He cried, “My God, my God, why hast thou forsaken me?” (Matthew 27:46). Jesus drank the wrath of God. He felt the way a lost sinner would feel. “Surely our griefs He Himself bore, and our sorrows He carried; Yet we ourselves esteemed Him stricken, Smitten of God, and afflicted (Isaiah 53:4-6). For “He [God] made Him [Jesus Christ] who knew no sin to be sin on our behalf, so that we might become the righteousness of God in Him” (2 Corinthians 5:21).

2- The veil of the temple was torn from top to bottom.

The veil that separated the holy place from the most holy was torn (Ex. 26:31–33; 2 Chron. 3:14) from top to bottom indicating that it was not accomplished by human hands. The access to the most holy place was restricted to the high priest, and he could enter only once a year. So, the rending of the veil at Jesus death, and the consequent exposure of the Holy place, was Heaven’s signal that the typical service had ended—type had met anti-type. The Mosaic ordinances that pointed to the Lamb of God who would come and shed His blood to save all people were no longer needed. “having forgiven you all trespasses, blotting out the handwriting of ordinances that was against us, which was contrary to us, and took it out of the way, nailing it to his cross” (Colossians 2:13,14). Today, Jesus serves as our high priest in the heavenly temple (Hebrews 2:17 & 4:14).

3-An earthquake took place at the moment of Jesus’ death.

“And Jesus cried out again with a loud voice, and yielded up His spirit. … and the earth shook and the rocks were split” (Matthew 27:50-51).  The supernatural act of the earthquake was a clear act of God.

4-Tombs were opened and later on saints resurrected from death.


“And behold… The tombs were opened, and many bodies of the saints who had fallen asleep were raised; and coming out of the tombs after His resurrection they entered the holy city and appeared to many” (Matt. 27:51-53).

The violent shaking of the earth opened up the graves at the time of Christ’s death, the resurrected saints did not rise till after Jesus arose (Matt. 27:53). How appropriate that the Savior would raise with Him from the grave some of the captives whom the devil had held captive in death.


“When the centurion and those with him who were guarding Jesus saw the earthquake and all that had happened, they were terrified, and exclaimed, Surely he was the Son of God!” (Matt. 27:54).

The transformation of lives is an awesome testimony to the power of the love of God that was revealed at the cross “Greater love has no one than this, than to lay down one’s life for his friends” (John 15:13).

The plan of salvation is laid out in the Sanctuary. God’s people have always known that God has a Sanctuary in heaven. The Bible tells us: “Thou shalt bring them in,… 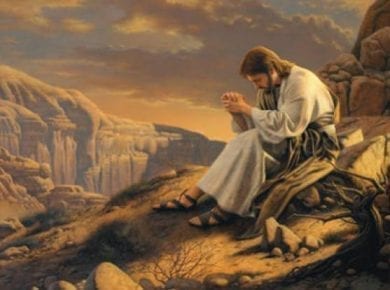 When Jesus was tempted in the wilderness, He did not turn the stones into bread because He said, “It is written, Man shall not live by bread alone, but by…