It is interesting that the phrase separation of church and State is not found in the First Amendment nor in the entire Constitution of the United States (nor in any law passed by Congress). The First Amendment has two religious clauses. It states, “Congress shall make no law respecting an establishment of religion, or prohibiting the free exercise thereof” (Bill of Rights, 1789, emp. added). The first clause is known as the Establishment Clause, and the second is known as the Free Exercise Clause.

So, where does this phrase come from? And what was its purpose?

This phrase came from 1802 letter written by Thomas Jefferson (the principal author of the Declaration of Independence – 1776), and the third President of the United States (1801–1809) to the Danbury Baptist Association. The Danbury Baptist Association of Connecticut wrote a letter to President Thomas Jefferson expressing concern over religious liberty and against a government establishment of religion. They said, “Our Sentiments are uniformly on the side of Religious Liberty—That Religion is at all times and places a matter between God and individuals—That no man ought to suffer in name, person, or effects on account of his religious Opinions—That the legitimate Power of civil government extends no further than to punish the man who works ill to his neighbor” (“Danbury Baptist…,” 1801).

Thomas Jefferson replied by letter dated January 1, 1802 where he agreed with the Danbury Baptists’ views on religious liberty and the separation of civil government from involvement with religious doctrine and practice: “I contemplate with sovereign reverence that act of the whole American people which declared that their legislature should ‘make no law respecting an establishment of religion, or prohibiting the free exercise thereof,’ thus building a wall of separation between Church & State” (“Jefferson’s Letter…,” 1802, emp. added). Jefferson’s statement regarding “a wall of separation between Church & State” was a confirmation that the government would not support a single religious group to the detriment of other Christian sects.

Today, the same phrase “separation of church and state” bears a different meaning than what President Jefferson meant when he wrote it. Sadly, many interpret this phrase to mean that the government should be neutral in all religious matters. Certainly, the founding Fathers did not mean to ban religion from the government because Washington, Adams, Jefferson, Madison, and others used the federal office of the President to convince the citizens to follow the morality of the Bible and pray to God. Here are few quotes that show their thoughts:

George Washington in his first  inaugural address said, “Since we ought to be no less persuaded that the propitious smiles of Heaven, can never be expected on a nation that disregards the eternal rules of order and right, which Heaven itself has ordained: And since the preservation of the sacred fire of liberty, and the destiny of the Republican model of Government, are justly considered as deeply, perhaps as finally staked, on the experiment entrusted to the hands of the American people.” (Washington 1789).

John Adams in his first inaugural address said, “And may that Being who is supreme over all, the Patron of Order, the Fountain of Justice, and the Protector in all ages of the world of virtuous liberty, continue His blessing upon this nation and its Government and give it all possible success and duration consistent with the ends of His providence.” (Adams, 1797).

Thomas Jefferson in his first inaugural address said, “Let us, then, …enlightened by a benign religion, professed, indeed, and practiced in various forms, yet all of them inculcating honesty, truth, temperance, gratitude, and the love of man; acknowledging and adoring an overruling Providence, which by all its dispensations proves that it delights in the happiness of man here and his greater happiness hereafter—with all these blessings, what more is necessary to make us a happy and a prosperous people?” (Jefferson, 1801).

James Madison in his first inaugural address said, “In these my confidence will under every difficulty be best placed, next to that which we have all been encouraged to feel in the guardianship and guidance of that Almighty Being whose power regulates the destiny of nations, whose blessings have been so conspicuously dispensed to this rising Republic, and to whom we are bound to address our devout gratitude for the past, as well as our fervent supplications and best hopes for the future.” (Madison, 1809).

It is clear that the founding fathers actions demonstrated that the First Amendment was not designed to extract all religion from the government. The political leaders at that time were clear advocates for governmental endorsement of religion in general, and Christianity in particular. 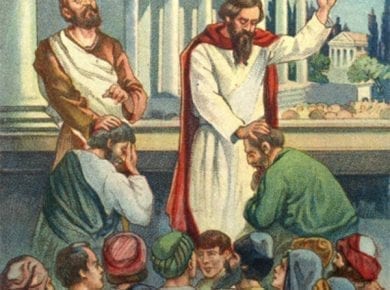 This page is also available in: हिन्दी (Hindi) “Therefore it is necessary to choose one of the men who have been with us the whole time the Lord Jesus was…
View Answer

This page is also available in: हिन्दी (Hindi)Many today wonder about the role of the modern nation of Israel in end time events. Dave Hunt the author of Best-selling book…
View Answer