God commanded His people saying, “You shall not tempt the Lord your God” (Deuteronomy 6:16). This command was also spoken by Moses to the children of Israel when they thirsted in the desert, and doubted that God will provide for them. Moses told them “why do you tempt the Lord?” (Exodus 17:2). God had done mighty deeds for them; yet when they faced trouble, they doubted Him and demanded evidence that He was with them. In their unbelief, they tried to put God to the test.

In the NT, this phrase was quoted by Jesus when the devil tempted Him in the wilderness. In the second temptation, the devil took Jesus up into the holy city, and set Him on a pinnacle of the temple saying, “If you are the Son of God, cast yourself down: for it is written, He shall give his angels charge concerning you: and in their hands they shall bear you up, lest at any time you dash your foot against a stone” (Matthew 4:6). Jesus answered him, “You shall not tempt the Lord your God” (Luke 4:12).

Satan wanted to take advantage of Christ’s humanity, and urged Him to presumption. When Satan quoted the promise, “He shall give his angels charge concerning you,” he omitted the words, “to keep you in all you ways” (Psalm 91:11) that is, in all the ways of God’s choosing. Jesus refused to go outside the path of obedience. While having perfect trust in His Father, He would not place Himself in a position that would necessitate the interposition of His Father to save Him from death. He would not push Providence to come to His salvation.

God had already testified that Jesus was His Son at His baptism (Matthew 3:17); and now to ask for proof that He was the Son of God would be putting God’s word to the test,–tempting Him. We should not present our requests to God to prove whether He will fulfill His word, but because He will fulfill it; not to prove that He loves us, but because He loves us. “without faith it is impossible to please Him, for he who comes to God must believe that He is, and that He is a rewarder of those who diligently seek Him” (Heb. 11:6).

Presumption is Satan’s counterfeit of faith. The Bible teaches that faith claims God’s promises and produces fruits of obedience. Presumption also claims God’s promises but uses them as Satan did, to excuse sin. For this reason Jesus bides us, “Watch ye and pray, lest ye enter into temptation” (Mark 14:38). Feeding on God’s Word and prayer would keep us from falling into the way of danger, and thus we should be saved from falling. 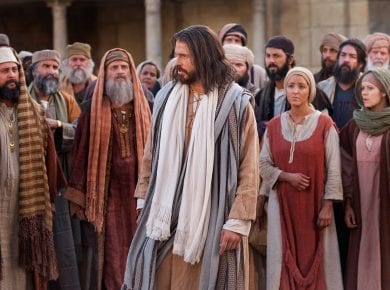 “Whosoever therefore shall break one of these least commandments, and shall teach men so, he shall be called the least in the kingdom of heaven: but whosoever shall do and…
View Answer