The city of Damascus is considered one of the oldest in the world. Geographically, it is situated on the eastern foothills of the Anti-Lebanon mountain. And it ranges 50 miles inland from the eastern coast of the Mediterranean on a highland 680 meters above sea level.

Damascus was an oasis in the Syrian desert. For its rivers, Abana and Pharpar, were, considered by the leprous Naaman, the Syrian general, superior than any river in Israel (2 Kings 5:12). Additionally, the river Abana, nourished by the snows of the Anti-Lebanon mountains, irrigated the territory and made it very fruitful.

The location of Damascus was probably the place where Abel was murdered (Genesis 4:1-16). Also, the Jewish historian Josephus (Antiquities i. 6. 4 [145]) attributes the city’s establishment to Uz, Shem’ grandson (Vol. I, p. 270).

Later on, Ezekiel the prophet mentioned that this city prospered as it traded wine and wool with Tyre (ch. 27:16, 18). Markedly, in 333 B.C. the Macedonian general Parmenion took the city for Alexander the Great. And in 64 BC, it was retaken by the Roman Pompey.

In the New Testament, and at the time of Saul’s transformation, Damascus was under the authority of Vitellius, the Roman governor of Syria. But when Tiberius died in 37 A.D., Vitellius hurried to Rome, and Aretas IV, king of the Nabataeans, seized it and ruled it by a delegate.

Uniquely, Damascus was cosmopolitan for its population was mostly Aramaic, but the city had a huge Jewish gathering. As in Jerusalem (Acts 6:9), national groups there established their own synagogues. It is projected that there may have been 30 or 40 synagogues in the city of Damascus at that time.

Correspondingly, the account in Acts 9:2,14 infers that there were many “disciples of the Lord” (v. 1) living there. Of these, many may have been that fled from the Sanhedrin’s persecution in Jerusalem. As Christians attended the synagogues, Saul attacked and persecuted them.

Thankfully, the Lord interpreted Saul’s evil plans and appeared to him in a vision that changed his life. The Bible tells us that this vision took place near Damascus. For Saul’s companions “led him by the hand, and brought him into Damascus” (Acts 9: 8). Then, according to Acts 9:10-19, God asked Ananias (Acts 22:12) to lay hands on Saul and lead him into baptism (Acts 9:10-19). Thus, Saul the persecutor was transformed to Paul the evangelist. And from that point on, Damascus became the center of the expanding Christian Church. 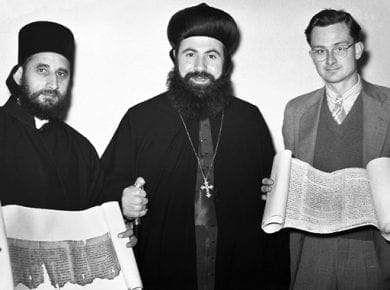 This page is also available in: हिन्दी (Hindi)The Nash Papyrus The Nash Papyrus of the 1st century B.C. is the oldest existing Hebrew manuscript of any part of the OT.…
View Answer