Jesus addressed the religious leaders of His time saying, “All too well you reject the commandment of God, that you may keep your tradition. For Moses said, ‘Honor your father and your mother’; and, ‘He who curses father or mother, let him be put to death.’ But you say, ‘If a man says to his father or mother, “Whatever profit you might have received from me is Corban”—’ (that is, a gift to God), then you no longer let him do anything for his father or his mother, making the word of God of no effect through your tradition which you have handed down. And many such things you do” (Mark 7:9-13).

The Greek word corban is from the Hebrew word qorban, which means “a gift,” or “an offering.” At Jesus time, anything over which a man pronounced the words, “It is Corban,” was dedicated to God and the Temple. At that time, a person might deny his own parents in the name of religion, with the sanction of the religious leaders and under the lie that God asked him to do that. The parents were not allowed to use or benefit from anything that was marked as being to the temple. Yet the son was allowed to benefit of it as long as he lived.

Thus, a greedy and selfish child evaded his parental obligations by a supposed obligation to God. By this deceitful plan, the priests schemed with their materialistic worshipers to pardon the latter from their God’s given duty that is to take care of their parents. These actions clearly violated the fifth commandment that states, “Honor your father and your mother, that your days may be long upon the land which the LORD your God is giving you” (Exodus 20:12).

Jesus defended the rights of elderly parents, whereas the religious leaders showed their true hypocrisy (v. 6) by being enemies of both God and their fellow men (Luke 10:27). Thus, the “tradition of men” stood forth in uncompromising opposition to the clear loving commandment of God.

Let’s begin by reading the passage : “And he took his staff in his hand, and chose him five smooth stones out of the brook, and put them in…
View Answer 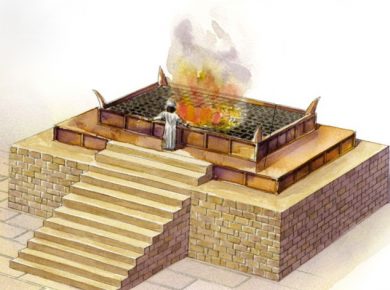