God reveals Himself to humans in three ways:

God reveals himself by internal revelations to the reason and conscience of each man. “Who show the work of the law written in their hearts, their conscience also bearing witness, and between themselves their thoughts accusing or else excusing them” (Romans 2:15; John 1:9). Paul uses the word conscience (Greek suneidēsis) more than 20 times in his epistles. He stresses that God gave people the ability to judge their thoughts, words, and actions. And he adds that the conscience can be over scrupulous (1 Corinthians 10:25) or “seared” by abuse (1 Timothy 4:2). And it can be enlightened by knowledge of truth (1 Corinthians 8:7) so that it works according to the light it received.

God reveals himself by external revelations through the works of creation. “For since the creation of the world His invisible attributes are clearly seen, being understood by the things that are made, even His eternal power and Godhead, so that they are without excuse” (Romans 1:20). God’s ways may be clearly understood by the mind with the help of the created works of nature. Even though affected by sin, the “things that are made” affirm that One of immeasurable power made this earth. All around us we see ample proof of His goodness and care. Thus, it is possible for even the pagans to see and know the power of the Maker of this earth.

God reveals Himself by the unique revelation of Jesus Christ, which confirms and completes the other revelations. “Hath in these last days spoken unto us by his Son, whom he hath appointed heir of all things, by whom also he made the worlds” (Hebrews 1:2). Because “No one has seen God at any time” God ordained that “the only begotten Son, who is in the bosom of the Father” to reveal His Holy name (John 1:18). And Jesus affirms this truth saying, “He who has seen Me has seen the Father” (John 14:9).

The words and deeds of Jesus both bore witness to God’s character. Jesus declared by His life and death God’s infinite love. “For God so loved the world that He gave His only begotten Son, that whoever believes in Him should not perish but have everlasting life” (John 3:16). Thus, the ultimate manifestation of divine love was the Father’s gift of His own innocent Son through whom it becomes possible for us to be “called the sons of God” (1 John 3:1). “Greater love hath no man than this, that a man lay down his life for his friends” (John 15:13).

God gives men conscience and reason to help them know Him and study His works. And He lays before them the proof of His goodness, wisdom, and power through His Son (Romans 1:19; John 8:32). Thus, He makes it possible for all Jews and Gentiles, learned and unlearned, and the wise and simple to learn about His character and truth. Everyone is invited to accept God’s free offer of salvation. The Lord says, “Look unto me, and be ye saved” (Isaiah 45:22). Therefore, no one should remain in darkness and be lost (Romans 1:20). 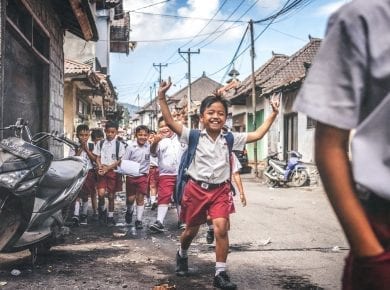