The first reference to Urim and Thummim in the Bible is found in the Book of Exodus in connection to the high priest’s garments “And you shall put in the breastplate of judgment the Urim and the Thummim, and they shall be over Aaron’s heart when he goes in before the Lord” (ch. 28:30).

The Urim and Thummim are two precious stones that are put into the sacred breastplate, worn by the high priest over the Ephod. The breastplate was to the garments of the high priest what the mercy seat was to the sanctuary itself. On both, God revealed His glory and leadings (Ex. 25:22; Ps. 80:1; Isa. 37:16).

The two pieces were onyx stones that had the names of the sons of Israel engraved on them – six on each one (Exodus 28:9,10). According to the LXX, they were “emeralds.” Josephus calls them “sardonyx,” which is  best kind of onyx (Antiquities iii. 7. 5).

The words Urim and the Thummim mean, respectively, “light” and “perfection.” Through these two stones, God made known His will to men (1 Samuel 14:41;1 Sam. 23:9–12; 28:6; 30:7, 8). A halo of light encircling the Urim was a token of the divine approval on matters brought before Him, and a cloud shadowing the Thummim was evidence of His disapproval.

Consulting the Urim and Thummim was said to be allowed for pointing out sinners, determining territorial boundaries, and to give approval from the king or a prophet, if there was an intention to expand Jerusalem or the Temple in Jerusalem.

The Book of Hosea implies, by reference to the Ephod, that the Urim and Thummim were vital elements in the popular form of the Israelite religion, in the mid-8th century BC. Though Josephus the Jewish historian does not specifically refer to the Urim and the Thummim by name, he does speak of the “shining” of the stones on the breastplate of the high priest, which “shining,” he says, ceased two centuries previously, owing to the prevailing iniquity (Antiquities iii. 8. 9).

Simon Peter, the apostle of Jesus, was characterized by a courageous and also impulsive nature. These characteristics were especially demonstrated in the following instances: 1-Being a natural-born leader, Peter became… 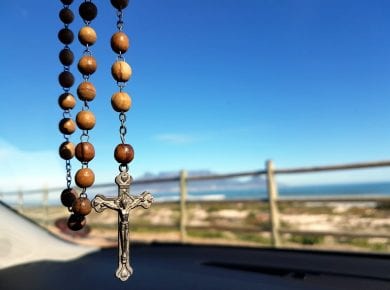 Praying the Rosary is arranged as follows: ten Hail Mary preceded by one Lord’s Prayer. The Rosary contains two parts. The first part is a direct quotation from (Luke 1:28)…