Cahleen Shrier, Ph.D., associate professor in the Department of Biology and Chemistry, talks on the science of Christ’s crucifixion. She explains the physiological processes a typical crucified victim experienced at the crucifixion. The following passage is found at: https://www.apu.edu/articles/15657/

After the Passover celebration, Jesus takes His disciples to Gethsemene to pray. During His anxious prayer about the events to come, Jesus sweats drops of blood. There is a rare medical condition called hemohedrosis, during which the capillary blood vessels that feed the sweat glands break down. Blood released from the vessels mixes with the sweat; therefore, the body sweats drops of blood. This condition results from mental anguish or high anxiety, a state Jesus expresses by praying “my soul is deeply grieved to the point of death” (Matthew 26:38). Hemohidrosis makes the skin tender, so Jesus’ physical condition worsens slightly.

Traveling from Pilate to Herod and back again, Jesus walks approximately two and a half miles. He has not slept, and He has been mocked and beaten (Luke 22:63-65). In addition, His skin remains tender from the hemohedrosis. His physical condition worsens.

Pilate orders Jesus to be flogged as required by Roman law before crucifixion Traditionally, the accused stood naked, and the flogging covered the area from the shoulders down to the upper legs. The whip consisted of several strips of leather. In the middle of the strips were metal balls that hit the skin, causing deep bruising. In addition, sheep bone was attached to the tips of each strip.

When the bone makes contact with Jesus’ skin, it digs into His muscles, tearing out chunks of flesh and exposing the bone beneath. The flogging leaves the skin on Jesus’ back in long ribbons. By this point, He has lost a great volume of blood which causes His blood pressure to fall and puts Him into shock. The human body attempts to remedy imbalances such as decreased blood volume, so Jesus’ thirst is His body’s natural response to His suffering (John 19:28). If He would have drank water, His blood volume would have increased.

Roman soldiers place a crown of thorns on Jesus’ head and a robe on His back (Matthew 27:28-29). The robe helps the blood clot (similar to putting a piece of tissue on a cut from shaving) to prevent Jesus from sustaining more blood loss. As they hit Jesus in the head (Matthew 27:30), the thorns from the crown push into the skin and He begins bleeding profusely. The thorns also cause damage to the nerve that supplies the face, causing intense pain down His face and neck. As they mock Him, the soldiers also belittle Jesus by spitting on Him (Matthew 27:30). They rip the robe off Jesus’ back and the bleeding starts afresh.

Jesus’ physical condition becomes critical. Due to severe blood loss without replacement, Jesus is undoubtedly in shock. As such, He is unable to carry the cross and Simon of Cyrene executes this task (Matthew 27:32).

Crucifixion was invented by the Persians between 300-400 B.C. It is quite possibly the most painful death ever invented by humankind. The English language derives the word “excruciating” from crucifixion, acknowledging it as a form of slow, painful suffering.1 Its punishment was reserved for slaves, foreigners, revolutionaries, and the vilest of criminals. Victims were nailed to a cross; however, Jesus’ cross was probably not the Latin cross, but rather a Tau cross (T). The vertical piece (the stipes) remains in the ground permanently. The accused carries only the horizontal piece (the patibulum) up the hill. Atop the patibulum lies a sign (the titulus), indicating that a formal trial occurred for a violation of the law. In Jesus’ case, this reads “This is the King of the Jews” (Luke 23:38).

The accused needed to be nailed to the patibulum while lying down, so Jesus is thrown to the ground, reopening His wounds, grinding in dirt, and causing bleeding. They nail His “hands” to the patibulum. The Greek meaning of “hands” includes the wrist. It is more likely that the nails went through Jesus’ wrists. If the nails were driven into the hand, the weight of the arms would cause the nail to rip through the soft flesh.

Therefore, the upper body would not be held to the cross. If placed in the wrist, the bones in the lower portion of the hand support the weight of the arms and the body remains nailed to the cross. The huge nail (seven to nine inches long)2 damages or severs the major nerve to the hand (the median nerve) upon impact. This causes continuous agonizing pain up both of Jesus’ arms.

Once the victim is secured, the guards lift the patibulum and place it on the stipes already in the ground. As it is lifted, Jesus’ full weight pulls down on His nailed wrists and His shoulders and elbows dislocate (Psalm 22:14).3 In this position, Jesus’ arms stretch to a minimum of six inches longer than their original length.

It is highly likely that Jesus’ feet were nailed through the tops as often pictured. In this position (with the knees flexed at approximately 90 degrees),4 the weight of the body pushes down on the nails and the ankles support the weight. The nails would not rip through the soft tissue as would have occurred with the hands. Again, the nail would cause severe nerve damage (it severs the dorsal pedal artery of the foot) and acute pain.

Normally, to breathe in, the diaphragm (the large muscle that separates the chest cavity from the abdominal cavity) must move down. This enlarges the chest cavity and air automatically moves into the lungs (inhalation). To exhale, the diaphragm rises up, which compresses the air in the lungs and forces the air out (exhalation). As Jesus hangs on the cross, the weight of His body pulls down on the diaphragm and the air moves into His lungs and remains there. Jesus must push up on His nailed feet (causing more pain) to exhale.

In order to speak, air must pass over the vocal cords during exhalation. The Gospels note that Jesus spoke seven times from the cross. It is amazing that despite His pain, He pushes up to say “Forgive them” (Luke 23:34).

The difficulty surrounding exhalation leads to a slow form of suffocation. Carbon dioxide builds up in the blood, resulting in a high level of carbonic acid in the blood. The body responds instinctively, triggering the desire to breathe. At the same time, the heart beats faster to circulate available oxygen. The decreased oxygen (due to the difficulty in exhaling) causes damage to the tissues and the capillaries begin leaking watery fluid from the blood into the tissues. This results in a build-up of fluid around the heart (pericardial effusion) and lungs (pleural effusion). The collapsing lungs, failing heart, dehydration, and the inability to get sufficient oxygen to the tissues essentially suffocate the victim.5 The decreased oxygen also damages the heart itself (myocardial infarction) which leads to cardiac arrest. In severe cases of cardiac stress, the heart can even burst, a process known as cardiac rupture.6 Jesus most likely died of a heart attack.

After Jesus’ death, the soldiers break the legs of the two criminals crucified alongside Him (John 19:32), causing suffocation. Death would then occur quicker. When they came to Jesus, He was already dead so they did not break His legs (John 19:33). Instead, the soldiers pierced His side (John 19:34) to assure that He was dead. In doing this, it is reported that “blood and water came out” (John 19:34), referring to the watery fluid surrounding the heart and lungs.

While these unpleasant facts depict a brutal murder, the depth of Christ’s pain emphasizes the true extent of God’s love for His creation. Teaching the physiology of Christ’s crucifixion is a constant reminder of the magnificent demonstration of God’s love for humanity that was expressed that day in Calvary. This lesson enables me to participate in communion, the remembrance of His sacrifice, with a grateful heart. I am struck every time with the stunning realization that as a flesh and blood human, Jesus felt every ounce of this execution. What greater love than this can a man have for his friends?”

Table of Contents 1-Accept God’s love.2-Confess and repent of your sins.3-Receive salvation by faith.4-Experince the miracle of changed life.5-Obey God’s commandments by His grace and power.6-Maintain this victory through the…
View Answer 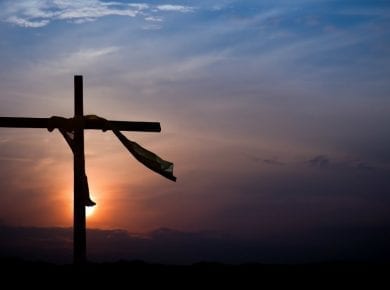 This answer is also available in: हिन्दीThe Bible teaches that Friday, Nissan 14 was the day of the crucifixion. Mark 5:42 confirms that, “And when evening had come, since it…
View Answer