Thank you for your question. There are a lot of images circulating the internet of these giant skeletons discovered that date thousands of years ago. A lot of them could be fake, but that doesn’t go to say that giants never existed. The Bible states that “there were giants on the earth in those days …” (Genesis 6:4). In fact, before Goliath, the giant that David killed, was ever mentioned, there were 8 other passages in Numbers and Deuteronomy of the children of Israel having to fight giants in Canaan.

So why isn’t this idea generally accepted?

Several sources likes Snopes try to discredit the idea that there could ever have been giants among us. One reason may be because it really goes against the theory of Evolution, which states that man is evolving and getting better. This may explain why giant skeletons are rarely displayed in museums.

In June 2018, the famous giant skeleton of an Irishman which was on display in a British museum for more than 200 years was taken down after years of pressure “to release the skeleton so it can be respectfully buried” (The Irish Post, 2018).

Was there giants in America?

A little over one hundred years ago, there was talk of giant skeletons being found in America. In fact, Abraham Lincoln even mentioned it in one of his writings after seeing Niagara Falls:

“When Columbus first sought this continent — when Christ suffered on the cross — when Moses led Israel through the Red Sea — nay, even when Adam first came from the hand of his Maker — then as now, Niagara was roaring here. The eyes of that species of extinct giants, whose bones fill the mounds of America, have gazed on Niagara, as ours do now.”

Several sources actually cite that there were:

Even today, you can still find headlines of giant skeletons being found around the world:

So while some accounts of giant skeletons may be untrue, it doesn’t mean that there are no such thing as giant skeletons. We mustn’t take everything we read as fact, but instead “test all things, hold fast what is good” (1 Thessalonians 5:21). This is especially true in this day in age of social media.

We hope this has answered your question. Please feel free and write back for any other questions. 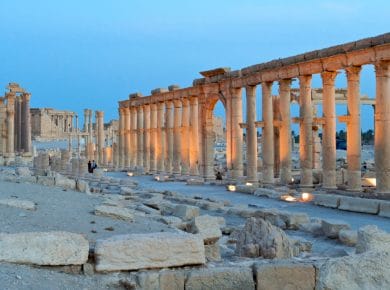 Geography The city of Damascus is considered one of the oldest in the world. Geographically, it is situated on the eastern foothills of the Anti-Lebanon mountain. And it ranges 50…
View Answer

The apostle John possessed a hot temper that Christ named him the son of thunder (Mark 3:17). He had a spirit of pride, ambition, resentment when injured, and was eager…
View Answer